In Pursuit of Trivia...

Inside my head is a bastion of useless knowledge…but I am not quite sure where I left my cell phone. I can tell you the secret service code name for George Bush…but I forgot that we had invited friends over and went to the library instead (sorry Carolyn!). I can tell you the oldest registered trademark (and the first trademark in England), but I can’t remember the name of the movie I went to see last week. I can remember lots of things that happened before I had children…but after, it’s all kinda fuzzy. Those brain cells have been sucked out and I am left dry.

We are a fam 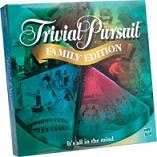 ily that is quite fond of trivia. When I was young, I played trivial pursuit in the 80’s with my parents and brother…my husband and I are regulars at trivia contests at our local bar…my kids are big fans of “Scene It.” We have all sorts of incarnations of trivia games…and the more recent dvd trivia games.

In high school, I was part of the academic team. I remember one of the first questions: “Complete this quote: ‘And this is good old Boston, The home of the bean and the cod, Where the Lowells talk only to Cabots, and the Cabots talk only to_______’” My teammates were quite shocked (and thrilled) that I knew the answer. How did I know it? It was used in the beginning of a Jeffrey Archer book that I had read recently. My team had enough wins that we were invited to participate on “High Q” – the quiz show that is on WSB on Saturday mornings. We didn’t do well on sports questions like: “Which college’s mascot is a horse named “Traveler?”

How do I know this stuff? Sometimes, I am not really sure! If it’s a question abo 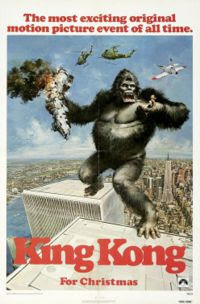 ut the late 70’s through the 80’s I might know because I can associate it with what grade I was in. I remember seeing the re-make of King Kong in 1976 – I remember it was ’76 because we lived in Florida, I was in first grade, I went with the girls that lived behind our house and I remember going to a shop and buying stickers after it was over. I remember that Entertainment Tonight started in 1981, when I was in 6th grade, and that John Anderson was an actual viable third party candidate (well…he actually didn’t have a party at all) against Carter and Reagan in 1980, when I was in fifth grade. I remember him probably because my dad voted for him (he almost always voted for someone that was not in the mainstream).

For events and trivia that I cannot lock onto a school year memory, I am sometimes fumbling. Sometimes I can get things right just because I am a fan of imdb.com – like: “What actor was in all three of these movies: ‘Cold Mountain,’ ‘Gone in 60 Seconds,’ and ‘Sky Captain and the World of Tomorrow?’” Sometimes, I can arrive at the answer simply by using my noggin and thinking about NAFTA: “What four countries does the US import the most automobiles from?”

So, is there a difference between memory and knowledge? For trivia, the line is blurred. A good trivia question should make you pause and think (Who was the last man to set foot on the moon?)…it should be on the tip of your tongue (What character was played by the same actor in both the movie and TV version of MASH?)…and if you don’t know the answer, when you do hear it, you should slap yourself on the head and say “oh…yeah…” (What color is Sponge Bob’s tie?) Did you know that there is even a word for people who collect and study trivia?

And do you know what is helping my trivia game these days? It’s homeschooling. By studying with my child, I can now answer: “What alloy is made up of iron, chromium and nickel?” and “What was the political party of George Washington?” or even “How long was the 100 years war?” Perhaps some of those brain cells are returning after all…

Oh I can so relate! I can! That was to funny.....*Ü* especially about associating things, dates, events with what grade we were in! My husband and I were just talking about that... how funny….

Thanks for stopping by!

So, what is the oldest registered trademark (and the first trademark in England)?

Ah yes, the long lost brain cells. I am still keeping my fingers crossed that they will continue to return as we progress in our school years. I'm certain I've forgotten more than I know at this point. hee hee

Hi I'd like to congratulate you for such a terrific made site!
I was sure this is a nice way to make my first post!

Sincerely,
Sage Brand
if you're ever bored check out my site!
[url=http://www.partyopedia.com/articles/elmo-party-supplies.html]elmo Party Supplies[/url].