I hear that Tuesday is the day that I am supposed to be random.  But since I am usually a day late and a dollar short.  Thursday makes perfect sense to give you the bits and pieces.  Flotsam and jetsam.  List of sundries.

I had almost thought that I was back in the swing of blogging.  And now it's been almost two weeks since I posted.  I have 9 posts in draft on my dashboard.  But I don't suppose that counts.  However.  My photoblog is current.  Shocking, no?

A post that is currently residing in my head.  And not in the draft section.  Is one on Judy Blume.  But every time I think about it.  I get irate.  And flummoxed.  For what you ask?  Barnes and Noble has a new rating system on their website.  And a group rated "Are you there God, It's me Margaret" as a book that is IFFY for anyone under 14.  IFFY?  Are you kidding me?  I could go on and on.  But what comes out is incoherent babble.  And incoherent babble rarely makes a good blog post.  Unless it's titled Foderol.  So.  Instead.  I decided to get my 8 year old a copy of the illustrious book.  All in the spirit of solidarity.

Speaking of books.  I just finished Edith Wharton's "Ethan Frome."  It was my bookclub reading for the month.  And I had thought I read it in high school.  But after finishing it.  I am not so sure.  I don't recall any of it.  Of course it is always possible that I was supposed to read it.  But didn't.  Anyway...I really liked it.  The writing is amazing.  And picturesque.  But the subject matter.  There is not another way to describe it other than bleak.  Or tragic.  Ethan - the title character - is just trapped in a horrible life.  Where he is just trying to figure out how to survive.  Rather than to live.


Katie is studying weathering in science.  Specifically  Devil's Tower in Wyoming.  And how it's the neck of the volcano.  But the outside of the volcano eroded away.  Naturally, we watched "Close Encounters" to go along with the lesson.  About weathering.  *Ahem*.
We end up going to Panera bread every Thursday for lunch. It's an expensive addiction. But yummy.

Madalyn keeps talking about this delicious drink she is getting at school. She wants to know when we can get some ya-hoo milk. And she refuses to believe me when I told her it's called yoo-hoo. Not ya-hoo.

I am just loving LOST this season.  I don't think that there has ever been a show that is that enveloping.  And I love that Katie is watching it with us.  Look at the cool shirt I found for her: 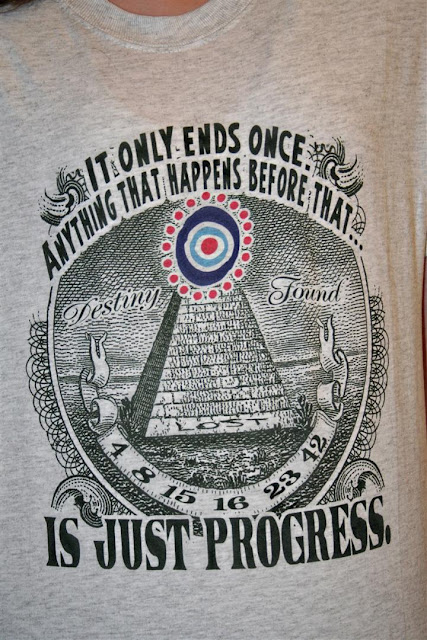 On the other hand.  I don't think that American Idol could be any worse than it is this season.
So...what about you?  Opinions on Judy Blume?  Did you pretend to read required books in school?