Another week breezed by here at casa Sunshine and Lemonade. A week without too much drama. Which is surprising. Especially since my children live here. But I'll take it. Anytime.

Last Friday, Madalyn brought home her work from the week in her Friday Folder. They had been taking timed tests in math - to work on their 0-5 math facts. She got a 92% on addition. And a 53% on subtraction. I asked her what happened with subtraction (she got that low because she didn't finish most of the page, not that they were wrong) - and she says "Well, mom. Subtraction is just not my thing." So...can you see her now? In high school. Telling her math teacher - "yeah, subtraction is not my thing. But I can do a mean quadratic equation."

On Tuesday, Katie went to a homeschool cooking class at our local Young Chef's Academy. There were 19 kids there. I don't think they were expecting quite so many! It was an hour and a half class (or a little less for us because I thought it started at 11:30 rather than 11) - so I got a little time alone - and Katie got to cook a breakfast burito and blueberry muffins - and most importantly, she got to eat them. The classes are only once a month, so she'll have to make do with cooking in our kitchen until the next time.

And then last night after dinner, the girls presented me with this: 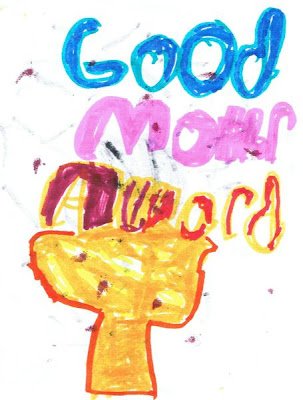 The good mother award. I am not sure what I did to spurn this creativity. Oh, wait, yes, I do know. They lost all privileges yesterday - so perhaps this was their way of entertaining themselves. Hmmm...maybe instead of asking what I did...I should be wondering what they did. And why are they trying to butter me up? Aren't they sweet?

This is what we accomplished homeschooling:

GRAMMAR/WRITING: I did what I said I would do. We stopped the Note taking workbook and I got a vocabulary program. We started Wordly Wise. 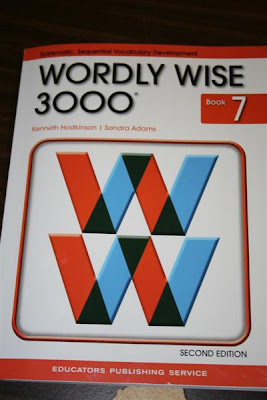 I really like it. And after a week, she has learned new words. And how to use them. And I think she'll retain it. It's very challenging - which is just what she needs. Also, I have made writing for her blog part of her school work. She got a blog back in February and I let her write what she wanted. Most days it was text speak and craziness. And then she let it fall by the wayside. I told her that if she really wanted to be a writer, then she needed to write. Go check out her blog.

LOGIC: We are continuing through the workbook and this week has mostly been analogies. Did you know that they took those off the SAT? Anyway, today she had to make up her own. She was provided with the first part - and had to do the second. For example: sour is to pickle as _______ is to __________. So she did sweet to molasses. My favorite one was this one: net is to fisherman as guillotine is to executioner. She can be a bloodthirsty one.

GEOGRAPHY: This week we started studying China. I meant to do this first. To go hand in hand with the Olympics, but it just didn't happen that way. She read a book about China - and some articles from a DK encyclopedia about the country. And we finally used our Geography through Art book. To make it so that I didn't have to be the crafty one - I just told her to pick what she wanted to do out of the China section. And she chose to make a paper cut out. She did a great job with her dragon: 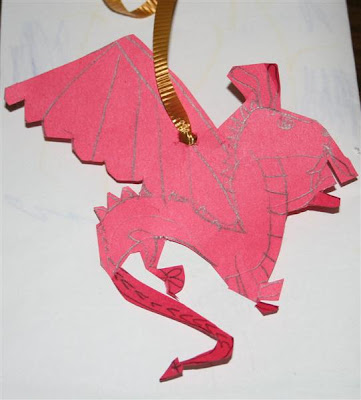 HISTORY: We continued along with History Odyssey, this week studying the Akkadians, Sumerians, and Mesopotamia. I made her watch a "They Might be Giants" video. And now she can't get the song out of her head.

I thought it was pretty funny...

BIOLOGY: We moved from the microscope to the Science encyclopedia - and learned about the taxonomic binomial system of organizing living things. And we have talked about the parts of an animal cell. Today were were supposed to capture an ant and look at it under the microscope.

Michael made our slide to trap the ant. But he used corrugated cardboard. So, the ants keep escaping. He needs to re-engineer it!

MATH: We finished up our chapter on rate.

So, that was our week. There is that old saying of "you learn something new everyday." What did you learn this week?

I learned that Bella and Edward are having a baby!!!

Oops, don't tell your daughter if she isn't that far into the series!

I also learned that my house will NOT clean itself.........
nor will my laundry fold itself.

I also learned (after staring at it for a veyr long time) that you guys are working on Wordly Wise vocab, not Worldly Wise. I could not figure out why anyone would want to learn Worldly vocab.

Wow, it has been an educational week here.

have a great long weekend!

I've learned that I am not a pixie and that I shouldn't believe everything I read.

How cool that your daughter has a blog. Mind if I show it to my daughter, Megan and Christie 9 and 11

I learned that you linked a THEY MIGHT BE GIANTS video on your blog. I've loved them for years. Ever heard "Birdhouse In Your Soul?" I love that song in a big way.

And I learned that sometimes...maybe...people let me down. Famous people. That I don't know in real life. Who have been wronged, and whom I feel for. But who stomp their feet like petulant children and then voice heavily veiled observations. When, all along, I think they knew what was going on in the first place.

Cryptic, much? You know of which I speak. I think.

Your daughter's blog is great! It sounds like she likes a lot of the same books and things that my daughter does: Pokemon, The Warriors series, Harry Potter, and the Twilight series. Jessica is on the last of the Twilight series and she has been telling me about it as she goes. It sounds like it's getting pretty strange and a bit gory to me but she seems to really like the series. Although she hasn't finished the last one she seems to be taking a break from it for now. Is Katie an Edward or Jacob fan? Jessica prefers Jacob. My daughter choses a werewolf over a vampire. Is that good? :o)

I want to know who Lula is talking about.

I learned that Mesopotamians can sing...and have a video.

I learned that your girls are buttering you up with a good mother award.

I learned that no matter how much I think I suck, my family loves me and is here for me.

Wow! What GREAT, SWEET girls you have! I love the award! So sweet! Man...I could never home school...you are waaay smart! I need to attend your school! Hmmm..what did I learn this week...that my oldest child may have a future in toilet paper folding? Oh, Oh, oh...(You know I wanted to say "Mr. Kotter, Mr. Kotter!" I learned to download pictures!! That's HUGE for me! I need to GET a life! Happy long weekend to you and your's!

That video was AWESOME! I'll have to show that to hubby. He'll get a kick out of it. And "Sugar's" blog is fab! Love the header on it. I was admiring the copious pics of cute kittens. We're thinking of going the route you did. By getting 2 I mean. And I want to know who Lula was referring too also. Nosy much?

Looks like a great week, thanks for sharing it.

Been a busy week, huh?
Same here!
I learned that just when I think I get to rest, my husband has other plans. He's invited people over Sat and Sun.
oh, well, it'll get done whenever. For now, I'll enjoy my company.
Have a great holiday weekend!

We use Wordly Wise at the school I work at. They use it everyday!

I learned how to play a mean game of cricket with darts.

I learned that the weather/season can affect my mood.

And last I learned that kids know the best way to get themselves off of punishment. [-:

I applaud your efforts - but I would rather gnaw away at my radius and ulna (those are arm bones) than home school.

I have no patience for that. You should do a homeschool webinar!!

Yeah--subtractions not my thing either. I mean, who wants less of anything except headaches and pounds :)?! Worldly wise---LOVED that book. I remember continuing to read it after my kids were done with school----just teaching myself a few new words :)!

Great week Kat! I'll have to come back and watch the TMBG video a bit later. I'm on a blog roll right now :)!

I learned not to bite off more than you can chew:-) My Blog Around the World feature was great and generated a lot of interest in me. Yeah:-) Just take little bites:-)

By the way, I have a surprise for you over at my website:-)

Cute dragon! I'm off to check out your daughter's blog!

I really love your Good Mom Award. Can your children talk to mine and hook me up with one of those babies? LOVE it.