It is the story that seems to never end. But today. It will. Finally. Really.
And apparently I left ya'll with a cliffhanger. It's always been my goal to write a serialized set of posts. With endings that beg for more information. But. I have realized. My writing skillz are not that good. But I did it with my last Vegas post. Without even realizing. So. To answer your questions. Yes. Michael got his shirts back. Ya'll can all let out the collective breath you were holding.
After I left Elena, I went to get ready for the conference. And then back to the casino. Down one hall. And another. Around a corner. Ask someone. Turn around. Go to another hall. A different corner. And then I found them! I saw Lula. And people I have only seen online. Like Heather. And Tiffany. And Angie. And Jen. And DiPaola Momma. And Tonya. And Swirl Girl. And somehow. I did manage to have a brain and get a picture with Swirl Girl! 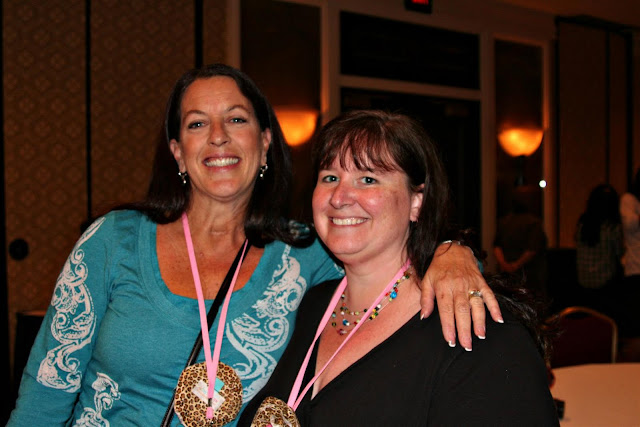 I am not sure what happened to my brain. Cause my camera was right there!

The conference had a short opening. And then we broke for dinner. And then re-grouped for the evening cocktail party. Where there was dancing. And an open bar. Shannon, Lula, Elena, and I hung out together. 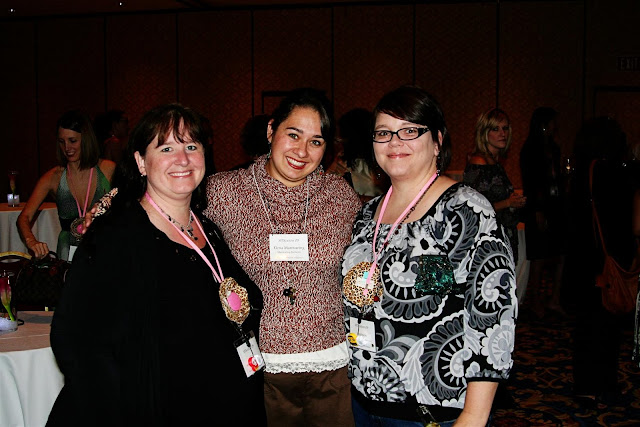 And we took lots of photos on Lula's camera while she was off dancing. Socializing. And drinking. The best photo of Michael and I was taken on that camera! 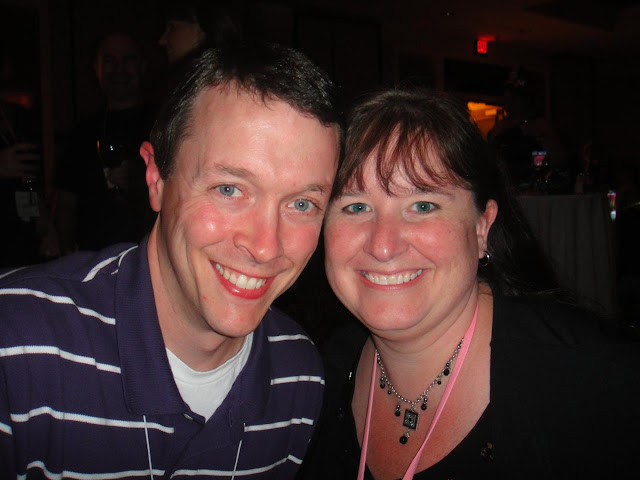 We finally crashed late. And then had to get up early again. While we were conferencing. I left Michael with an assignment. To go to the half price ticket booth and find us something to do in the evening. I was hoping to see a Cirque show. He was armed with a priortized list. And a budget.

So...what did we end up with? No tickets to Cirque. Or to that guy with the puppets who won America's got Talent. Damn budget. But we did get tickets to Anthony Cools' naughty hypnotist show at the Paris. (Did any of you see him when he was on the Millionaire Matchmaker show?) The show didn't start until later in the evening, so after the conference was over Shannon and I arranged to meet for dinner and then do a little gambling. Slot machining?

As part of our room package through SITS, each room got $25 in slot vouchers. Can you believe that Shannon had never gambled? Well we set out to eradicate that. Pronto. Unfortunately. Shannon listened to me. She got her voucher. Dumped it into a machine. And then decided that that particular machine didn't like her. And went to switch. Except that her money did not follow her. It stayed on that machine. Which some floozy took over. And won money with Shannon's money. And left. All before we realized what happened. Oh. Wait. Was that supposed to stay in Vegas?

Shannon and I finally decided to make our way to the Paris to meet Michael for the show. Did I mention that Shannon was joining us. What would you call that? A double date? Triple? A menage? No. Wait. Ummm. Staying in Vegas? 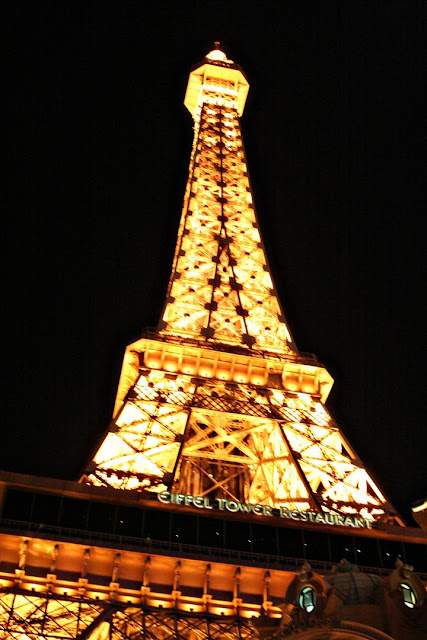 When we got to the Paris, Shannon and I decided to lose a few more quarters in the slots before we found Michael in the line.

For the show, we had front row seats. And I must admit that I was quite surprised that Michael did not volunteer to be part of the show. Evidently he decided that if he paid for it, he'd watch it. And after seeing the show. I am quite glad he remained in his seat. Anthony Cools puts on a hilarious show. It is naughty. Raunchy. And not for the faint at heart. Or those without water proof mascara.

After the show, we set out for a different show - that of the Eiffel tower. We rode up the elevator to the observation deck. And what a sight. At night. With the lights. Vegas is just beautiful. 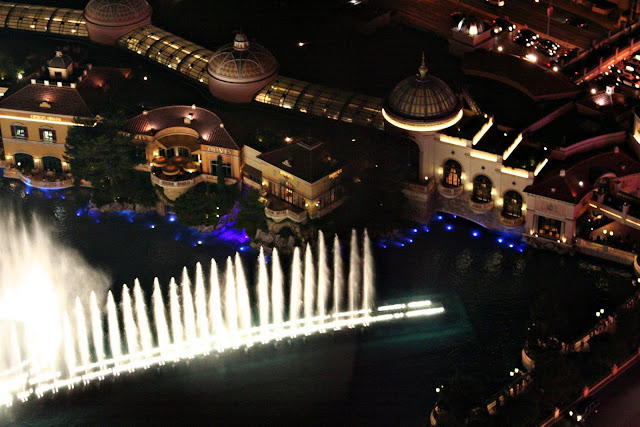 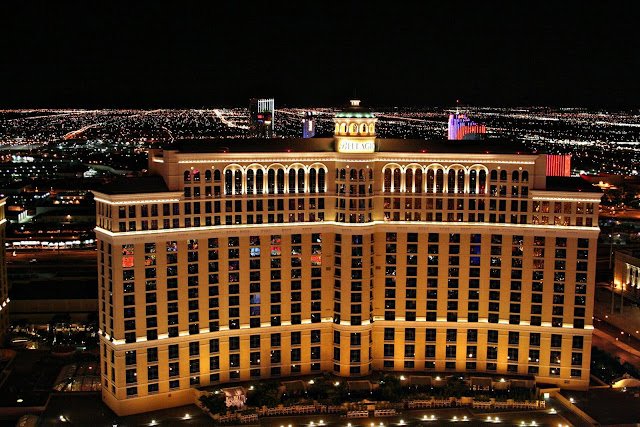 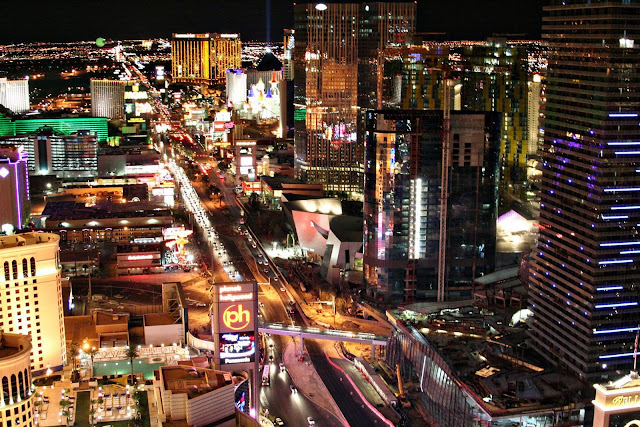 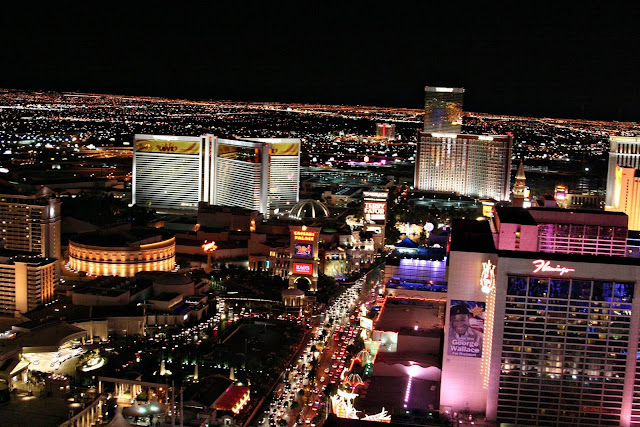 And finally. Our trip was over. With just a few hours of sleep, we had to check out for our 7am flight. And head back to the real world.

So...what about you? Have you ever seen a hypnotist show? Heard of Anthony Cools? Or forgotten to take a picture that you really meant to take??

Those last pictures make me think of the opening credits of CSI! I am loving your photography skills, girl!

Never heard of Anthony, but I've totally forgotten to take "important" pictures before, or better yet, forgotten the camera altogether. I understand your bummedness (and yes, that is now a word.)

I have never gambled before either, and really have no desire to. I don't have the best of luck...

Haven't been to Vegas in over 10 years. It has definitely changed A LOT! Have gambled before. Never been to a hypnotist show and have, on many occasions, forgot my camera and missed out on great photo opportunities.
Oh, and glad to know Michael got his shirts back. I, too, was wondering. :)

I haven't heard of Anthony Cools but there's a great hypnotist whose name is on the tip of my tongue that I've seen a few times. But not raunchy. So glad you had a great time - even with the icky floozy!

I love the nametags btw. Those are the coolest ones I've seen yet. :)

So, um, I'm a gambling virgin. I have never heard of Anthony Cools, either. I would have loved that conference and all the sights and meeting you and Lula and Elena. Someday you will all be in the same room again. *sigh*

Goodnight that first picture of me looks like I had a few sips of Lulu's wine! LOL! Your city shots are GORGEOUS!

All I can say is Mike was forced to participate in a Vegas show one time. Because we were on the front row. But I can't talk about it. Because it happened in Vegas.

Let's go with calling me the 3rd wheel.

I would have died... DIED, I tell you!... had Michael participated in that show. I'd never be able to look your husband in the eye.

I am SO glad I got to meet you in person. I haven't heard of Anthony Cools.

Swirl Girl was there, where the heck was I? How did I miss that she was RIGHT THERE. Ugh.

Can you believe I fell asleep after the conference. Yep, while everyone else was out partying on their last night in Vegas, I was curled up in my hotel room bed, all alone. I'm a real party animal :)

Now you could have come and crashed Kim Kardashians party on the Friday night :). That's where we ended up. Can I put a big LAME on that too. I'm way too old.

I expect to see you at SITScation in San Diego next year.