You would think that sitting here at my kitchen table, typing away on my laptop, would be an inexpensive venture. But, the blogosphere has set off some rather pricey cravings. I am going to need to rob a bank win the lottery so that I can travel the world, buy more lenses for my camera, get Teaching Company dvds, and buy Photoshop. Oh wait...I've already indulged in photoshop. But I have absolutely no idea as to how to use it. I am in desperate need of a class. Or a pool boy to hold my hand and tell me which buttons to push. Did I just say a pool boy? Yep...thought so.

A few weeks ago, over at Pioneer Woman's website, I downloaded "actions" (which were free...Free is my husband's favorite word. Right up there with "I have a coupon.") for Photoshop. Actions are...well...I really don't know. I think they are basically a group of things that you find yourself doing over and over again to your photos...so you can group them and do them all at once with the click of a button. I really needed that Pool boy (maybe we should call him photoshop boy) to explain how to get them into photoshop once I downloaded them. That was an afternoon adventure all on its own.
Over the weekend, I was playing with the actions - and thought you might want to see what they can do. And maybe I will inspire someone to go out and buy photoshop. And then you can explain to me how it works.
Here is a picture from the strawberry patch. And using the words of Pioneer woman - this is the straight out of the camera shot (SOOC): 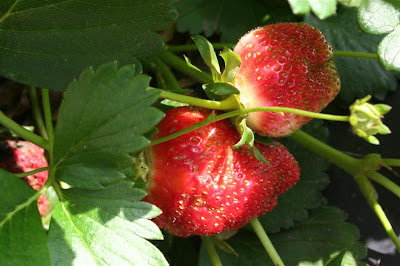 The first action I tried is called "fresh and colorful." I really like this one with people. It's pretty nice with strawberries, too: 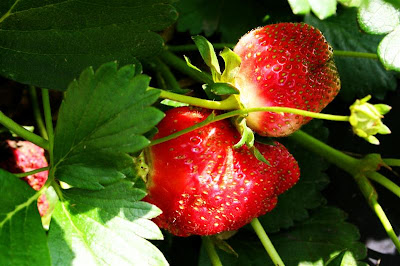 The action really does what it's called - makes those berries look quite devine.
The next one I tried is called "lovely and etheral." This one doesn't really give it that pop. But it's still an improvement over the SOOC shot: 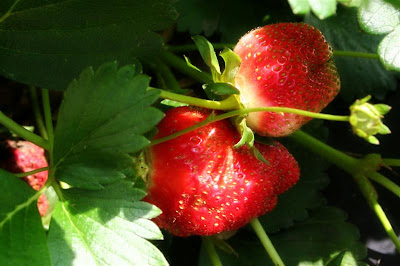 Next up: "soft and faded." I like this one. It would be really cool if I could figure out how to just make the berries redder - but keep the background like this. But I don't know how. Go take a class and then get back to me. Please. 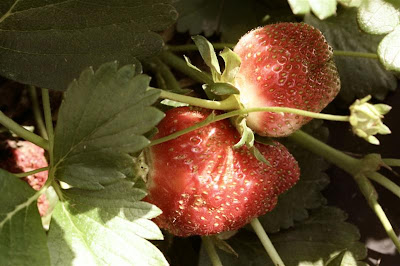 Then I tried "define and sharpen." This is a simple action with some quick results. I really like this one...but not quite as much as the "fresh and colorful." 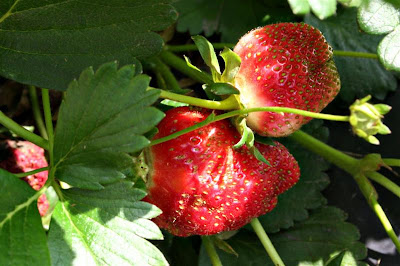 Then I did one last tweak...and gave the defined and sharpened image a quick edge burn: 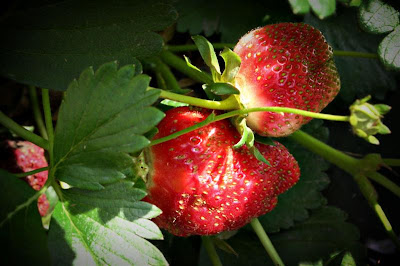 What do you think? What's your favorite?

You people are going to force me into photography, aren't you? I need to be learned.

Hands down..."fresh and colorful" is my favorite.

And can we please name the pool boy Javier? And does he do laundry?

hmmmmmm. i cant tell the dif between any of those pics mom! except the one that's brown. sheesh they all look the same these berries.

I like "fresh and colorful" the best also! And really, your SOOC is wonderful!!

You'll learn it...you're a determined woman! Then you can teach US! =)

Hey, I have a cheaper (tho less fun) option than Javier the pool/photoshop boy. Check out lynda.com. For $25 a month you can watch hours and hours of good, clear, well-explained Photoshop video tutorials. So, you know, wait til you have a month where you know you'll actually have time to watch .... $25 is a pretty cheap tutorial. Or alternatively, you can spend hours scouring the internet and find a bunch of freeby tutorials, too.

I love the "fresh and colorful" pix of the strawberries, but I would *love* to try the "soft and faded" on a few pix I have of my son. Great, now I'm gonna have to get photoshop. Got a coupon? :D

Heather--I have always *loved* taking pictures...but blogging has pushed me over the edge. To obsession maybe? I think everyone is now in agreement that Javier *is* the pool boy :-)

Sugar--you can't tell the diff? Well...you need to be doing your school work anyone. I'll attempt to explain when you are done. Why are you on my blog anyway?!

Nicole--Welcome and Thank you. I am not sure that I am determined enough. I think lazy takes over far too easily.

Susan--Soft and faded would be my favorite if I could figure out how to make the berries as red as they are on fresh and colorful. I know there is a way to do it...but Javier hasn't shown me yet. I will absolutley check out lynda (and let her know that *I* will call her Javier). Maybe in June - the kids are both at sleep away camp for a week...and will be doing other camps when they get home.

FM--A coupon? Ummm...nope...but a tip I do have. I got mine from ebay. It's not the newest version - just the one before that. I figured I wouldn't know the difference between the two programs anyway! I paid $125 for mine (it's $650+ retail)- brand new, sealed in the package. Are you tempted?!

I'm so excited your giving photoshop lessons! Although, I only have elements...

Rhea--what? Wait...who said *I* was giving photoshop lessons? That's Javier's job. Or wait...you have elements...maybe you can tell me how to do things!

Angie--I think I am going to have to do another post...but running the same actions on people. Fresh and colorful is my fav action for just about everything.

Cool, Kat!! Sugar's comment cracks me up. Fresh and colorful is my fav. You are doing a great job. I think you asked in one of my past posts about my photo-shopping skills. I refer to what I do as "photo-shopping" but I don't even own the real Photoshop program. I just use my old Printshop that I actually love. Much easier to understand and does a great editing job. Although, I do plan to purchase Photoshop soon. I just dread learning all about it. It looks rather complicated compared to my photo editing process. :) I'll have to get advice from you!! ~Jill

I really, really need to get photoshop...

Wait, isn't SITS having a contest for a photo program ??