A visit with St. Nick 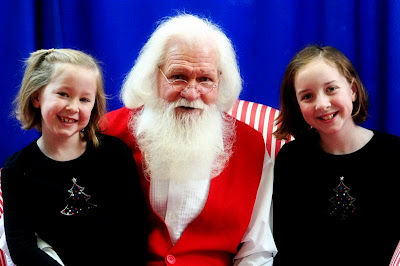 On Monday, we ventured over for our annual visit. And just as we walked in the door, I realized that I did not hold the door open for Santa who was right behind me. He walks on stealthy feet. He was apparently running late. As were his helpers. So the girls and I walked around. Looked at closed stores. And chatted on a bench next to Santa's house. Which has apparently been downsized since last Christmas. 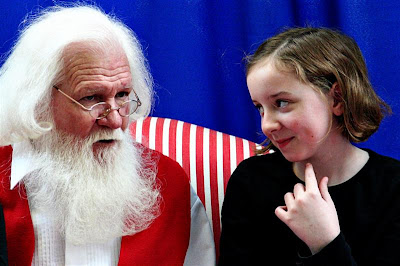 We finally decided to get in line behind two other families so that we would be ready when Santa was ready. About 30 minutes later, Santa emerged down the mall from us. And he stopped to talk to several families. Moms with babies in their arms. And Madalyn loudly declared that Santa needed to stop flirting. And get to his Santa seat. 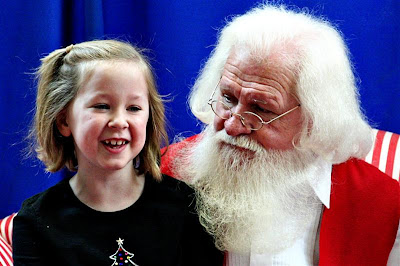 The idea of Santa flirting sent Katie into peals of laughter. Laughter that is so hard that she started crying. Especially when Madalyn. Given an audience held captive. Launched into her best Elvis impersonation. I am not sure why Santa speaks like Elvis. But in Madalyn's world. He does. And according to Madalyn. Santa was telling the mom: "Hey bay-buh. Wanna see my reindeer? Did you know...that I have a...a big sleigh?" 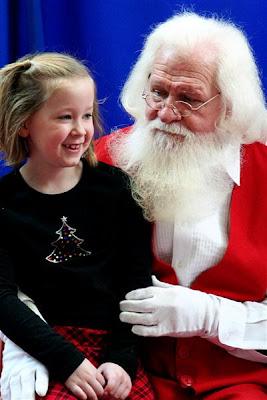 I swear. I don't know where she gets it. Or why.

So...what about you? What are your kids asking for this year? Is there anything that you are hoping to find under the tree tomorrow? Is there anything that you cannot wait for someone to open from you? (many thanks to Debbie. Because I totally lifted these questions from her post yesterday!) Merry Christmas to all! See ya Friday for our next edition of the Friday Follies. And don't forget to enter to win the date night!

Theme song: Queen - I want it all. And because I wanted a Christmas song, too. Jars of Clay - God Rest Ye Merry Gentleman.

The girls and santa look SO cute!!

That Santa is AWESOME! Where is he? Cumberland Mall? That was the mall that we lived close to when we were in Marietta and my mom would NOT let us go there without and adult!

And about your little Elvis impersonator........my Ben thinks he is the best Elvis impersonator and he has the cheesiest lines that he says in his elvis voice, maybe we can hook the two of them up. Then they can make each other laugh!

One of my boys asked for a chef hat and apron and the other asked for cowboy gear!
Oh and a Wii was on the list......and it's under the tree!!

Merry Christmas to you all!

your daughter is hilarious.
thanks for the laugh.
at our house ... there was a request for a baby that grows teeth (from the 4 1/2 year old) and pie (from the 19 month old ... don't ask.)
me? my grandma is really sick right now. so i just want her to get better. and maybe that new camera so that i can get a kick ass picture of her with my girly-girls at least one more time.

holy santa batman! he is straight from the pole! wow!

daughter wants an easy bake...like we don't do enough baking? and son, well, it depends on when you ask him!

H is asking for a Nintendo DS and a TV for her bedroom. Santa will be bringing the TV; my mom has gotten the DS.

M has been asking for an iPod, a drum set and a piano. She wanted this little pink kid-sized piano... but then saw an iCarly keyboard at Toys R Us that she said would be ok. Santa's bringing that and the iPod for her.

Back when my mom and I shopped the outlets on Black Friday... she splurged and bought herself a Coach purse. I went back last week and got a fab deal on a Coach wallet for her. So I am looking forward to seeing her open that.

Have a Merry Christmas!!!

We took 20 month old Monkey to see Santa today. On the way back to the car, I asked him what he told Santa he wanted for Christmas. He said, "Pizza!"

I think Santa can handle that.

Oh my gosh, that is SO the best Santa story I have heard. What a great memory! I am excited to just be with my family and to watch Sam open the Buzz Lightyear doll we got him.

I don't know where Trish lived, but I went to Comberland alone all. the. time.
What was she smoking?

And look at that first picture and tell me, who is doing the flirting?

How nice that you were able to carry on your tradition with "your" Santa.

We have the same children. have I mentioned that?

Essie all of a Sudden wants a nintendo ds... NOT HAPPENING

Gert coudln't think of anything to ask for... so santa gave her a list thing to fill out later....

That? Is hysterical! "I have a big sleigh." OMG. What a girl!
Noah asked for a car (check), truck (um, did I buy one?), remote control tractor (he got that idea from an older boy at the sitter's, so he's getting a remote controlled back hoe, or something), and a Cars cup (can you tell he just names things that are around him? He has a special cup at the sitter's. Check.)
I just want both my kids under the tree tomorrow, as detailed in today's post. Bring your kleenex. And I can't wait to see the gmas and gpa/poppop open their photobooks because that always makes them cry. :)
Merry Christmas!

That is one great looking Santa! Your kiddos crack me up!

Our teen asked for money & clothes. The tween, artsy stuff and clothes and books. The toddler, whatever mom & dad choose for him! LOL We got him a great, radio flyer scooter. He is going to LOVE it!

MERRY CHRISTMAS (& Eve) to you all! Have a wonderful holiday!

What a great santa. That is so cool that you keep going back to see the same one.

I can't wait for my MIL to open her photo calander we get her for Christmas every year. She just loves it (or at least I think she does the way she fusses over it) and this year we also make her a photo book from her oldest granddaughters wedding which both of my children were in. I know she will love that!

Merry Christmas to you and your family. Have a Blessed New Year!

Your Madalyn is a riot. I can't wait to meet her.

I love that you have a Santa you stalk. hehe

I can't wait for my kids to open their gifts.

I've had some unexpected ones myself. my mom and stepfather just gave us a 42" plasma hdtv. I'm in shock. We've been using a 15 yr old grandpa tv for sooo long...and this new one is beautiful and huge.

And we have tickets to a Cirque de Solei performance Friday night...and my grandmother took me shopping for some new outfits (as well as a bra that fits). I'm feeling so thankful.

May you enjoy a blessed and peaceful Christmas! Create some magical memories

I want to wish you the best Christmas ever and I have really enjoyed getting to know you this past year. I can't wait to read more about you and your sweet sweet girls.
BTW, that is one rockin' Santa.

Can you believe that I did NOT take my kids to see Santa this year? I meant to, I planned to, I was in the mall with Rose on her bday and we could have gone but didn't. I even talked about taking them yesterday but then we got a TON of snow and then thought about taking them today but had no sleep and am now sick. Rose saw a santa at dance a few weeks ago, but it was the lame kind with a beard that looked like a bunch of cotton balls glued together.
Heehee...I love that Santa sounds like Elvis, that so totally makes sense!

My daughter is asking for a pet. She is getting a Webkinz. I hope that's good enough because I am allergic:-) I hope there is a camera under the tree but there won't be. Darn economy:-( We already opened our family gift: Wii. That was the big gift and we have already been having fun with it:-)

Have a very Merry Christmas:-)

I Love Purple More Than You said...

Your santa is awesome~ I love the Elvis impression!Kids do the funniest things

What fun! We saw Santa yesterday, but our pics weren't quite as cute. I think Santa was mentally ready to be done with seeing kids and get on with the delivering of presents.

And me? I got a VITAMIX! If that had been my only present, I would have been totally ok with that. Totally ok.

Hope your holiday was fantastic!!!

She's cracking me up...too funny! And I can see why you go to see that Santa. Wow.

Great photos! I can see why you go out of your way to see this Santa!

Hope your holidays was terrific!

And so glad santa stopped flirting so he could get to his santa seat and pose with your beautiful girls.