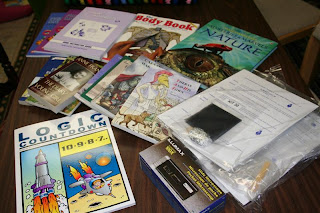 My quest for a history curriculum continued this week – and I still haven’t made any decisions. We did register for Art through History through History at Our house. I am hoping by sticking our toes in the water, we can get a feel for the style of this program to see if might be a fit. A lot of the curriculum that I ordered for next year arrived. I love getting boxes! I got what we needed for Noeo Bio II, Singapore 6A and B (but for some reason, I forgot to order the workbooks!), some miscellaneous books for history, and a new typing program for Katie to use. One of the sources I used was Rainbow resources…and I got a copy of their catalog with my order. That book must weigh 87 pounds…and would surely harm a small child should it fall off my counter or unexpectedly fling from my hands while being interrupted for the millionth time with cries of “she did…” 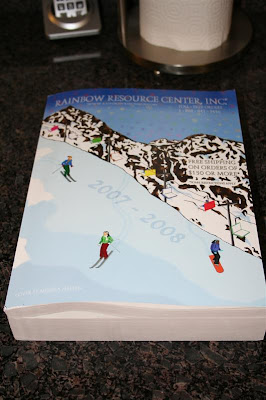 My book reading time this week has been somewhat limited as I found a new obsession: Pioneer Woman. It all started with a picture of Apple dumplings over on Jeanne’s blog. It’s all her fault. The pictures are beautiful and mouth watering. I found the recipe over on Pioneer woman cooks…and I rushed to Target to buy the ingredients. (The kids are making them tonight – I’ll tempt you with the results tomorrow!) Then I spent the rest of the day on Confessions of a Pioneer woman…reading her love story…looking at her amazing photography…and wishing (for only about 5 minutes) that I lived on a ranch. Eventually the pleas of my children were heard and I went back to my own reality. I told the kids it was Jeanne’s fault. It’s also Jeanne’s fault that I sent the link to my friend Cindy in Texas. She is currently obsessing about cowboys and apple dumplings too…and so standardized math test questions are no longer being written and her house is being taken over by the cats.

Madalyn had a good week at her school. She had a project this week to make a poster showing ho 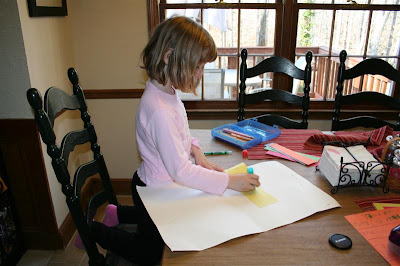 w to keep your teeth clean and healthy. Here is a picture of her makin 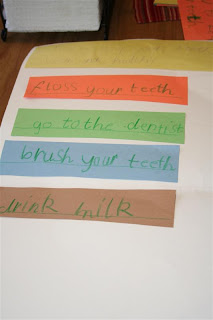 
I am on the PTA of Madalyn’s school. I keep track of all the volunteer hours (basically it means that I read code – I have to figure out parent’s John Hancock’s…and then figure out what class their child is in…and then log the volunteer hours per class. It also involves a lot of hair pulling and gnashing of teeth). This week we had our monthly PTA meeting. We sit at tables with attached stools. That are made for 6 year olds. Not for thirty-somethings whose rears are much too large for said stools. My feet were asleep within a few minutes. And then because it’s fun…I stayed and had lunch with Madalyn…eating school food…AND sitting for another half hour on those stools. I am still recovering.

MATH: Katie spent the first part of the week doing chapter reviews about division and multiplication of fractions. Then on Wednesday we moved to “Areas of Triangles” and learned the simple formula: ½ x base x height. Next week we will begin covering ratios. Katie looked at the upcoming chapter this morning and said “are we really going to spend time with this chapter?”

HISTORY: Katie finished reading “The Wave” and said next to “Ties that Bind, Ties that Break,” it was her favorite required reading for school. I told her about watching it as an afterschool movie when I was in elementary school. She is most upset that we cannot get it on dvd. We began and finished chapter 25 covering Japan in Manchuria and The Long March. Tonight we are going to play go-fish with “economic” sanctions. When Japan invaded Manchuria, the League of Nations imposed economic sanctions (meaning no trade with member nations and Japan) until they withdrew their troops. The problem was that Japan’s biggest trading partner was the US…who was not a member of the League of Nations. With Go-fish, there will be four players: Japan, the US, and 2 league of Nations members. Japan can only trade with the US. The US can trade with anyone. The league of Nations countries can only trade with the US and other League members. We’ll see if the girls still think that “go fish” is fun after our experiment!

PHYSICS: Katie continued with week 25 of the Noeo Physics curriculum and learning about Magnetism. She continued to learn about electro-magnetism and learned how to make a compass – and then how to make the compass point at an electrically charged current rather than north. Again…I am obsessed with LOST…among other things…maybe by studying Noeo Physics, I’ll figure out what the islands secrets are…

SPELLING/GRAMMAR: In Grammar, Katie worked on adjectives and began looking at formatting letters (does anyone actually write those anymore?); in Spelling, she continued working with suffixes. 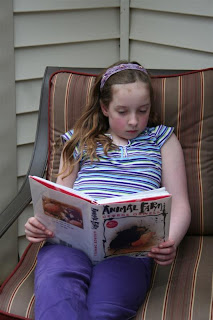 than I expected. I had her read this not only because it correlates with our history, but because I read the book “Deconstructing Penguins” which labeled this as a fourth grade book. I loved their discussion of the meanings of this book and I cannot wait to discuss it with her next week. (Hey…did any of you notice that the author of this book posted on my blog?!! He commented after my post about the book – and how I felt like a moron after reading it. At least he didn’t offer the advice of my friend Cindy – which was to simply to take my kids to see “Horton Hears a Who” and call it a day.) Katie said she liked the book – but not as much as some. She says the pictures are gross and give her a stomach ache. I am reading too (but I am not done yet because I’ve been blogging…and obsessing) and I must admit, she’s right…the pictures are nasty. 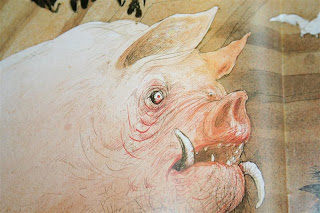 PIANO: Katie is working on sheet music and experimenting with a piece that she can play with different notes (I have no idea as to what that means…it’s her word…of course, when I first asked what she learned in piano this week, she said “stuff.”).

OTHER STUFF: Our homeschool group started back again this week. Katie started swimming lessons there. She is a good swimmer – but could use some fine tuning on her strokes (umm…someone needs to show her what they are). Her friend Diana joined our group and is in class with her. She also went back to folk dancing. Her other class is Latin (with Abbeyj) and they reviewed to get ready for the National Latin exam next week.

It is awfully strange reading what Katie is doing for history. She is working on almost exactly what Camille is working on. Camille read Animal Farm last week (I don't know if I've ever read it!).

BTW, I really like your blog template and went ahead and redesigned mine to use three columns too. What do you think?

AND, I need to order next year's math books soon, so I can add your workbooks to my order so you can avoid shipping fees. Just let me know.

I doubt it will help you since you seem to have already done all the legwork, but here's a list of the curricula we might use next year:
Learning with the Gooney Bird Kids

Great week! I had to go over and see the apple dumplings! I was hoping for scratch n sniff though! :(

That’s pretty cool that your daughter has Latin w/ Abbeyj! What a treat!

Thanks for the links for the recipe... mmmm I cant wait! Its a must make!

Have a great weekend... and thanks again for coming by... I always love hearing from those that stop by! Its so fun to get to know you... *Ü*

Gwyneth--How are you so on the ball? I publish and you comment. It's scary. I checked our your blog (err...blogs...wow!)...love the three columns. Your plan for history looks like what we will end up with...some canabalized version of History Odyssey and SOTW and something else...

Lisa--I agree - I love to get to know the people who visit my blog - I'd love to know who some of those dots on my map represent! (OH...and I do understand your Muppet show and Foghorn leghorn references about my WW post - oh, the '70s!)

I saw those famous apple dumplings too. I was in shock when I saw the two blocks of butter!
I love your weekly report, it is so colourful and interesting. There is so much to do on your blog. You don't mind if I hang out a while...

You still have that attention to detail as represented by your blog.It's my favorite place to go. no wonder you always edited my papers before the English professors got a-hold of them. Those were the days of handwritten papers and non-air conditioned dorm rooms. Sigh. Now, despite decades of engaging in brain-cell-killing activities, you remain one of the most engaging writers I have ever known. Of course, if you were to write about ME more often that would make your stories all the more riveting...Still, thanks for the contribution to enlightenment you have made in my life for the past few decades. I love and adore you--keep blogging!
cindysue

LOL! I'm so glad you're hooked on Pioneer Woman - I just love her!
I hope your dumplings turned out well, they sure were a crowd pleaser at my house.

Oh, and I wanted to let you know I saw that you tagged me for the What's on Your Desk Meme... I don't know if I'll do it, because I don't really have a desk, but thanks so much for thinking of me.

And good luck to Katie on the National Latin Exam!!

Art through History - are you using it and do you like it? I've not heard of it.

Pioneer Woman - you now have me hooked on her as well. I stayed up so very late one night reading her love story only to realize that it was still being told. Ugh! I was so disappointed. And she has only posted one more update since then. But I do love Pioneer Woman. I have no idea how she does it all though.