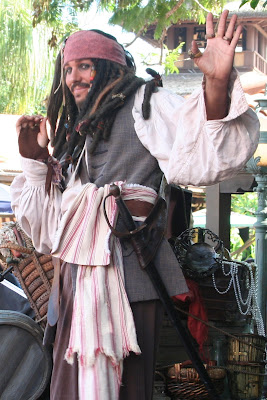 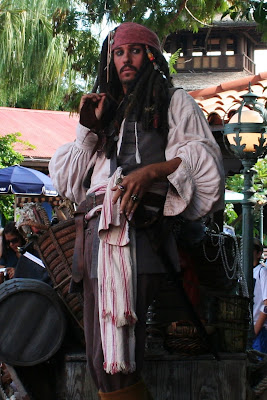 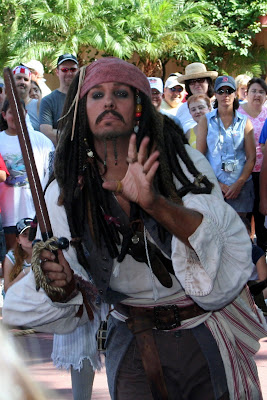 Johnny Depp is SO sexy! Especially dressed up as a pirate.

LOL how fun! He looks just like Mr. depp.... How was he in comparison as far as walking and acting the part??

Wow, this guy does look a lot like the Real Thing.

He was really good. Sounded just like him. Had that same drunken swagger. Great little show that was meant for the kids - but you should have seen the moms lined up around him! :-)

I would have enjoyed seeing him perform.

Thanks for popping by my blog. I'm glad to have 'met' you.

Yeah, I would have been one of those "moms lined up around him", yup.

My ds6 LOVES the movie and he teases me all the time about how I think Johnny Depp is cute :)

I probably would've been at the front of the "mom line"! The music from that movie is awesome too!

That is really spooky. What must it be like to be so similar to someone. You got some really amazing shots of him too!

When we were at Disneyland last year, they had 2 bodyguards with their Capt. Jack Sparrow impersonator because people (of all ages) were trying to maul him!

We met him as well last January. Didn't he look JUST LIKE Mr. Sparrow?

And I think I was more excited to see him than the girls although both my girls were quite excited too. hee hee