MY week in review

Every Friday, I blog about our week. It's usually about what we accomplished homeschooling. Sometimes it takes the form of a mini (okay...sometimes not so mini...picky, picky!) rant. Sometimes I tell you about what all of us accomplished (attempted...thought about...procrastinated...failed to do...). This week...you are just going to hear about me. It's my blog, and I'll pontificate if I want to.

In order to tell you about a week of homeschooling...Katie has to finish her week. We have had so much drama today (ummm...and yesterday...and the day before...ummm...all week) that she didn't finish much. My math genius stood here in the kitchen and said to me (about a simple multiplication problem) "I don't get it." Huh? I gave her a perplexed look, and the tears streamed and streamed. Again, huh?! I believe there has been an attack of hormones. Maybe we'll attempt that week in review over the weekend.

So, instead of Katie's week...you can hear about mine. Because it's endlessly fascinating. Compelling. Enthralling. Tedious?

Monday started with me going to water aerobics. I am not much of an exerciser. I don't even like to walk up the hill to get the mail. I figured that I love the water...I hate to sweat...it would be a good match. I am by far the youngest one in the class. It's interesting doing our "cycling" across the pool and being lapped by a 67 year old. Twice. After the class, I felt fine...but later that day, I could really really tell that I had worked muscles that forgot that they were muscles. They didn't much appreciate the reminder as they were quite looking forward to retirement as fat cells.

Tuesday brought a frenzy of a day. Tuesday is the day the girls have choir with Gwinnett Young Singers. And at the same time, I had to be at a homeschool class fair to "sell my wares" so to speak (get people to sign up for Latin classes for next school year). I had to make a display board and some handouts for people. Yes, I have known about it for a month...and the day of is the best time to do this you know.

I have been teaching Latin to high school homeschoolers for three years. I don't have a degree in it. And actually, I have not studied it at all since high school. It just stuck with me. I can decline and conjugate on command. I should be in a talent show. I took five years of Latin in high school. No, I was not held back. My high school started in 8th grade. Most 8th graders took art...but no, not me. See...my avoidance of crafts has been a life long thing.

So...anyway...on Tuesday...I needed to make a display board. Of course this requires a trip to my happy place. On Tuesday. Did you know that tri-fold boards cost $75? It was a pretty good deal if you ask me. A much better deal than those $400 jar openers. For someone who hates crafts (and creating a tri-fold board is a craft)...I didn't do so bad: 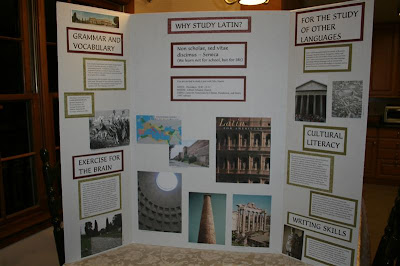 I had 9 students sign up for my class on Tuesday evening -- and I am sure that I will have more when we get closer to the start of the school year. Pretty good. I even stole a student from the Spanish teacher (shhh...don't tell!).

Wednesday brought another morning of water aerobics. There was progress. I was only lapped once. Okay, fine, one and a half times. Picky, picky. In the afternoon, I took Katie to the doctor for a mysterious fever. She registered at normal in the doctor's office. And then 3, count them 3, minutes later, registered at 101.8. Mysterious indeed.

The highlight of my Wednesday was going to see the musical "Avenue Q" at the Fox theatre. What? You haven't heard of this hilarious play? Click on the link to check it out. Basically, it's Sesame street for adults. The main character (err...puppet) just graduated from college...has no money or job...I mean, what can you do with a BA in English? So...he ends up in a run down apartment on "Avenue Q" with Gary Coleman (yes, that Gary Coleman) as the super...Which leads to the first song: "It sucks to be me." The music is hilarious - great songs like "everyone is a little bit racist" or "The internet is for porn." If you feel compelled (and you should!)...go to you tube and look up "Avenue Q" and you can see it in action and hear the songs.

Thursday...pretty uneventful. Because of Katie's mysterious fever we stayed home from homeschool classes so as not to inflict others with mysterious fever disease. Rhea, have you looked that one up on WebMD?

Thursday evening was my book club - and we discussed "Isaac's Storm" by Erik Larson. I am so glad that I read his "Devil in the White City" first. I would never have picked it up if I read "Isaac" first. It's about the Galveston hurrican of 1900 which is the largest natural disaster in the US. It's a compelling story about the hubris of the weather bureau (how they refused to use the word hurricane so that they would not panic people; how they did not allow the Cubans to telegraph weather information because they were easily excitable - and so that they would not "steal" weather forecasts; how they were SURE that no hurricanes could go as far west as Texas - and that hurricanes only move on ONE set path). Compelling, no? But...Erik Larson needed a theasaurus and an editor. I have never read a book that needed charts, pictures, and diagrams as much as this one. I was ready to throw it against the wall...and then I reached page 150...and the human element emerged. It was harrowing to read what happened on that hot and humid day in September of 1900.

And then there was today. The day of fluctuating hormones. I remained calm. I didn't need a mommy time out. I was on the verge. But I had a moment of Zen and moved on. Tonight the girls had their Spring concert with their choir. There are 4 different levels of choirs...so it made for a long evening -- but what a place to hear the beautiful voices of children. 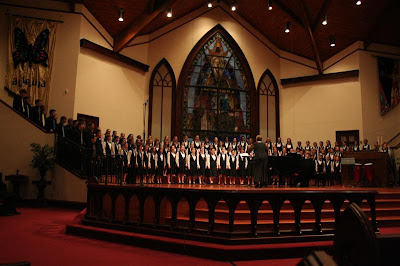 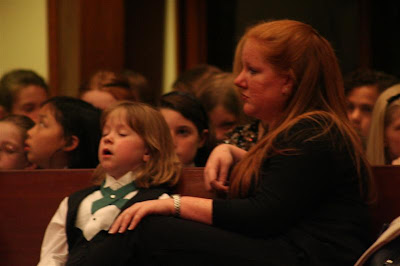 (Madalyn got a little sleepy by 10pm when she was waiting to sing with all the choirs!)

Sorry to hear that Katie hasn't been feeling well.

I wonder if the testing has had an effect on her confidence?

Morning Gwyneth! Testing does not bother her. When she took the third grade test last year, she scored off the charts...so this year we tested her for fifth grade. Both days she came home and said that fifth grade must be really easy. I think it's just a mystery fever...and allergies...with some hormones thrown into the mix!

Yay, you managed to post yesterday! I'm so glad.

I went to trusty WebMD and Katie could have Rocky Mountain Spotted Fever, Typhoid, Scarlet Fever, or, my favorite, Marburg Hemorrhagic Fever, which affects humans and non-human primates, so has Katie been hanging out with any apes or monkeys lately? just kidding!!

Good for you for doing water aerobics! I took some of those classes back in Austin, and I was also by FAR the youngest in the class. Those older ladies mean business!

I haven't been to Tarjay in a while, I think I need to go today. $75 tri-fold posters? lol

I like your Latin display, and I'm so glad you had a lot of students sign up. I was laughing at your stealing from the Spanish teacher. I took Latin starting in 5th grade, through middle school and high school and then even some in college, and I can't remember how to decline or conjugate on command. You definitely have talent!

I loved the picture of Madalyn sleeping. 10pm is late for us, mine would have been asleep too.

My 11 yr old, Donny, has fallen apart over easy math before, and he is quite the math pro, but he was just too tired and emotional. We went back to it a day or so later and he did fine. There's hope for Katie! Hope she feels better. Avenue Q sound super entertaining and funny. I'm jealous you got out to do something adult. I haven't in a while.

Ok, so I colored Easter eggs and you made a tri-fold bulletin for Latin. I think we non-craft-moms are equal for this week. And, does this mean that we get a free-pass-go from all crafts for the rest of the year?
Happy Weekend ... hope your daughter's feeling better.

Rhea -- Hemorragic fever, huh? I don't think she's bleeding from her eyeballs :-) The internet can be a dangerous place to play doctor!

Susan--I would love a free pass from crafts. For forever. I can't recall the last time we colored eggs. My whole reason for doing so is the photo-op :-)

I guess I've had my volume turned off lately, but when I just arrived on your website, I jumped out of my chair in surprise by your music. lol Volume was turned up loud by my younger son earlier today. Whew. A little adrenaline rush just now.

I love TRYING to be crafty, but I don't think I succeed...

OK, nearly shot water out my nose reading your account of water aerobics! Mostly because I can relate. Cody and I joined a yoga class, and nearly everyone there is over 55, and some are in their 70's. I mean, bless them that they can still get into those positions, but it doesn't do a whole lot for my ego when they're *that* much more flexible than I am ;)

It is refreshing to hear about Mother's week.
I have been taking the children swimming twice a week. Whilst they play around in the pool, I go for a good swim. It is so nice to have the thinking time and, although I hate the thought of going before hand, our son convinces me. When I get home I feel so tired but it is such a feeling of achievement too.
Don't worry about those pensioners. I remember going to a dance class in the evening with them. I used to go home at 'half-time' and still get terrible cramps from the effort. They were unbelievable.
Thank you for sharing everything. I love the photo of the concert...

Lorna--It is all about me :-) I don't know how those older ladies stay so flexible. Of course, I was never flexible, so I have nothing to maintain...

I love the photo of Madalyn sleeping.