Notes from a large state

We got home from our week in San Antonio last night. And I think that this is the first time I have ever come home from a vacation and not felt like I needed a vacation to recover from my vacation. It was a wonderful, relaxing week of catching up, eating, laughing, eating some more, visiting, and a field trip thrown in so that we could say we saw Texas. And so Madalyn could buy a souvenir. Because my money was burning a hole in her pocket.

This entire trip started with an innocent question. What are you doing the week of the 15th? Originally, the girls were going to choir camp. But it just so happened that I had not paid for the camp when the question was asked. And then the stars and planets were in alignment for the airline rate we got. The only way to fly direct to San Antonio from Atlanta was on Delta. And the prices are outrageous. But then, the Wal-mart of airlines started flying to San Antonio on June 11th…so Delta’s rates dropped. And dropped dramatically. I got such a deal, that my flight was booked before Cindy even told her husband we might be coming! Then again…he seemed to think I was coming by myself until right before we showed up on their doorstep.

We left on the 14th. Michael dropped us at the airport…and we got lunch there. The kids got kid meals…and their toy was play dough. You must know that it was a huge hit with the girls. Because play dough does not cross my threshold. But really, play dough at the airport? And what do my girls create with their play dough? Why phallic thumbs, of course. 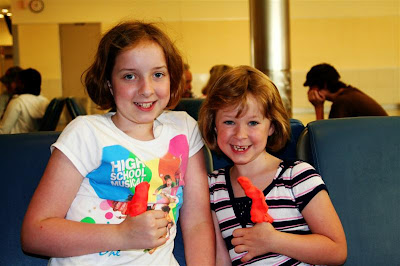 I read somewhere that girls will build enclosures – like houses, or “gated” areas for their animals to play…and that boys will build towers. All very Freudian. Except for my girls. Who are all about the towers. But I digress…

The girls loved the plane ride – especially the take off – and they were mesmerized by all they could see. 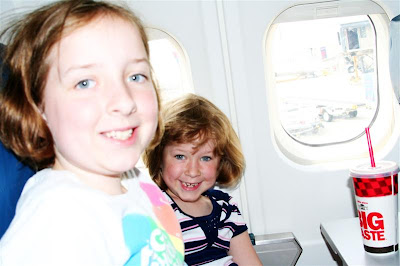 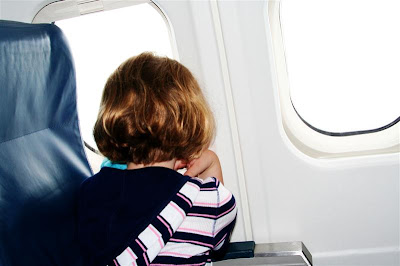 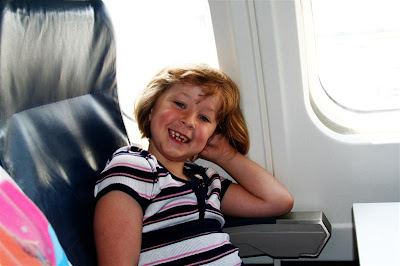 Katie decided to investigate all the pockets on the seats…and naturally she found the “convenience bag.” I had to explain what it was for. Especially as one side of the bag says it is for barf…and the other side says it’s a seat holder in case you decide to get off the plane if you make a stop over. Katie wanted to be assured that you would not use the bag for both purposes. She decided that one of her Pokemon stuffies was motion sick. 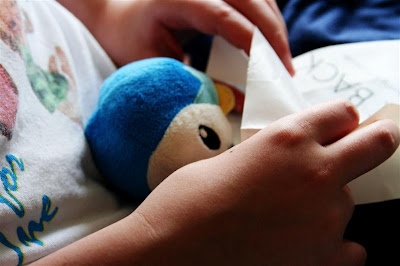 Don’t you want to fly with us?

Hi! I found you through a link on SITS! I love your blog! :)

Looks like you have a pair of fun traveling companions!

Well, the girls look like they really enjoyed the first part of the trip!!! lol Playdough and airplane rides. fun stuff!!

What field trip did you guys end up taking? I'm so glad you're home, relaxed and enjoyed your trip.

LOL !!! I don't think I'm ever going to be able to look at playdough again, without giggling !!!

It looks like they had fun!! My kids love plane rides until about an hour into it and then they're booooorrrredddddd.

Those are great phallic thumbs!! Hee Hee Glad you had a great trip to San Antonio. Just hate that I couldn't coordinate a trip over there to say hi. I'm really just a couple of hours away from that area. Great photos of the tree too!! ~Jill

Glad you are back and ready to hang out with us again. Although, I don't think you missed a blogging beat all week!

OK, Kat, I know you said don't ask...but enquiring minds want to know. How does one get mascara mars on the ceiling? :-)

They can totally fly with my girls anytime. 'Cause an airsick Pokemon toy is just so hard rockin' I can barely stand it.
p.s. And now, my newly-minted 35 year old is doing his signature version of Steve Miller..."Big ol' jet got a light on..." He knows this isn't the lyric, but insists on singing it wrong. Every time.

The songs you choose make for simply perfect blog reading! And a vacation that was actually RELAXING? This is unheard of! Glad you all had a blast.

This whole phallic art thing has got me rolling. Your girls are nothing if not entertaining! :-) Glad you guys had a great trip!

My wife just returned from San Antonio...she made similar comments when running from the kids :). Nice post!