I have made some progress on my challenge list – and actually managed to complete 3 books during my vacation week – which is much more than I accomplish during a regular week. Because I blog. I started the challenge in February, and I have now read 18 books. I have also read a book “in process.” My friend Jennifer is an author…and has asked some people to read her book before she sends it off to publishers. So…19 books. 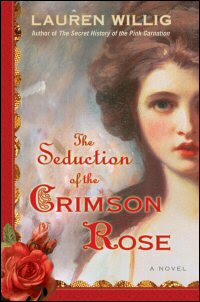 In the car, on the way to Tampa, I finished “Seduction of the Crimson Rose” by Lauren Willig. This is the fourth in Willig’s series about the “flower” spies of the London aristocracy during the Napoleonic wars (The first is “The Secret History of the Pink Carnation.). I really like this series. It has everything. Action. Adventure. History. And most importantly, romance. One of the things that I like about this series is that they are framed by another story: that of a grad student in today’s time doing research for her dissertation on the identity of the Pink Carnation. The juxtaposition of the contemporary romance with that of the regency time is a fun contrast. All the books in this series are very witty…but this one has a very cynical edge to it.

Next in line: Marie Phillip’s first novel “Gods Behaving Badly.” It is a comedy of the absurd. Imagine that the Greek Gods have moved from Olympus to a townhouse in London that they were able to get cheaply during the plague…and they haven’t cleaned it since. Because they are Gods. They have all but lost their powers because no one believes in them anymore. Even Eros doesn’t believe in the Greek Gods anymore and he is one! He says to his mother, Aphrodite, “I wish my mother was the virgin Mary.” Bickering Gods leads to seeking revenge on one another…and it takes a very ordinary human to step up and be a hero to save us all.

And while I am reading books that will never be read by my book group, I continue the trend with Zoey Dean’s “How to Teach Filthy Rich Girls.” This is a really clever book about a massively in debt Yale grad with an English degree. And having seen “Avenue Q” – you know that it sucks to be the main character – because what do you do with a BA in English?! If you are the heroine of this novel, you get the chance of a lifetime to have your debt erased by helping two filthy rich girls/Paris Hilton wannabes get into Duke. Take a moment to savor the vision. And the possibilities. One of the funniest parts of the book is the multiple guess questions that are proposed at the beginning of each chapter (she is trying to make studying for the SAT “relevant” to the girls): Choose the analogy that best complements the following phrase:
YACHT : SOCIETY PRINCESS
cardboard box : wino
Chihuahua : rock starlet
Cocaine : supermodel
Fendi Baguette : Sarah Jessica Parker
Drug arrests : Robert Downey, Jr. 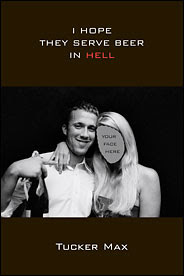 While we were on the cruise, my husband finished “I hope they serve beer in hell” by Tucker Max…and he handed it off to me. First of all…I apologize to any of you who picked this book up after seeing it on my website…and for some reason thought it was a recommendation from me. It is not. It is a clear departure from most books that I read. I think it could be categorized as the antithesis to the chick lit genre. I will admit that I laughed out loud at several stories…but pretty quickly, the book got old and stale. Perhaps it’s funnier to people who actually know Tucker Max. I am sure that it is hilarious to people who like stories about drinking, whoring, and excrement. And if curiosity is getting the better of you…just check out Tuckermax.com and you can read at least half of the book there. For free.

I was wondering about the 888 challenge also and too lazy to clicl on the link. lol Thanks for explaining!

Those books look good, the first three especially. Thanks for the reviews!!

Too lazy to click on the links, huh?! lol Oh well. I am addicted to my own sidebars :-)

You ought to pick up a copy of "The Secret History of the Pink Carnation." It's a really fun read...and for these books...you ought to read them in order.

Kat~ I have a special award to email you. Click on my blog email address and I'll reply. :) ~Jill

Jill--I cannot wait to see what you have created!

Aha. Thanks for explaining that. I did see the link but didn't have time to click on is so I thought I would "comment" pad instead ;)...I will click on it tomorrow...I'm tired!

Debbie and Rhea-- I am right there with you - I would much rather someone tell me about something than having to figure it out myself :-) - I'd especially like someone to come and tell me how to do photoshop.

Wow, only 8 comments on this post. Let's see what we can do to change that...

Maybe Tiffany and Karen won't see me coming this way.

I have my swap gift ready to go, I just need to box it up.

We're about to leave the house for another football game. Son Donny is nervous, son Remy has too much energy and mother Rhea has not showered all day. What's the point? I'm just gonna sweat more out there. UGH

Traffic on my blog is sloooow today.

I got a nap today, which was good because I slept horribly last night.