I would have to say that Grand Cayman is my favorite port. I love the stingray sandbar. The snorkeling is superb. The water is just gorgeous. I would have said all of that until today. My new favorite port is Isla Roatan, Honduras. I like that it’s a small pier and not far to walk to find the tours. I like that it’s not commercialized (yet…I have a feeling that it’s coming!). There is not a Diamonds International to be found (unlike Cozumel which seems to have one every other store). And even though the island appears third world…it is incredibly beautiful. (The first photo is the view from our balcony.) 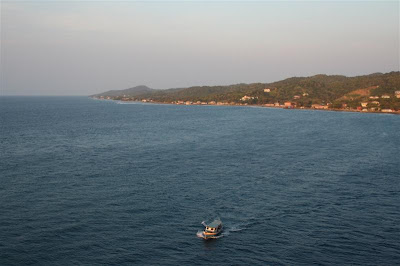 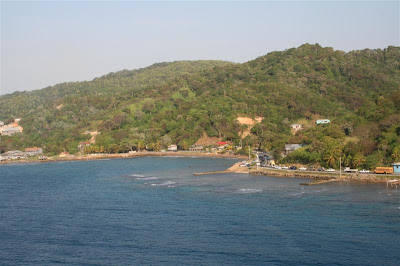 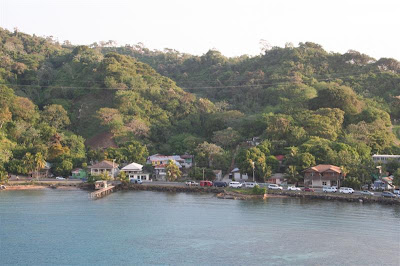 After getting everyone up…and convincing Madalyn that she really didn’t want to stay in bed…we had breakfast (any guesses as to what we ate?!) 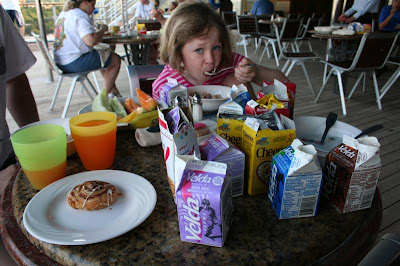 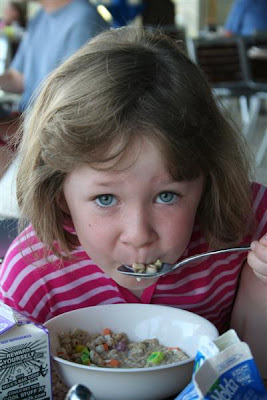 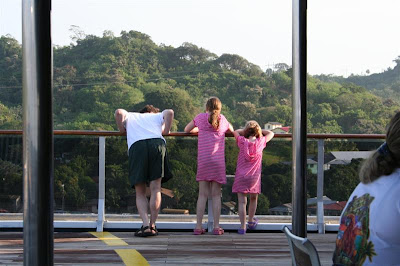 and then headed down to the gangway. We posed for several pictures and easily found our group right by the ship. 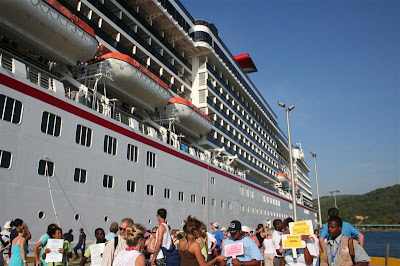 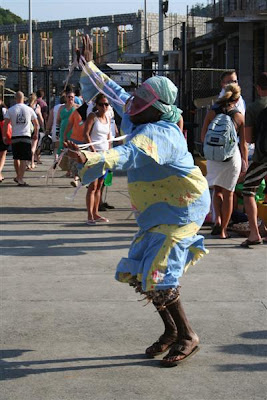 (they were still there as the ship left port!)…we took pictures with them 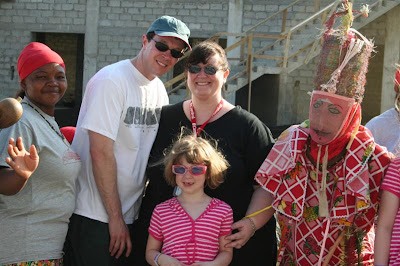 (they wore cool costumes...and played music and danced. But photography is not thier strong suit. Notice that only Katie's arm is in the picture. We are also missing the guy laying at our feet...and some other dancers in costume!)…and then realized that our group was leaving! We quickly caught up and got on a bus to Coral Cay for our snorkel adventure.

We seemed to have a very cautious taxi driver this time! He pointed out sights along the way like the hospital, Catholic Church, public school, and ship wrecks 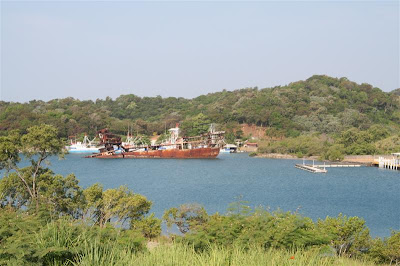 that we could see from the road. We were on a winding road that went up and up…and then we were on a non-paved section. The girls said it wasn’t nearly as bumpy as their jungle ride yesterday. 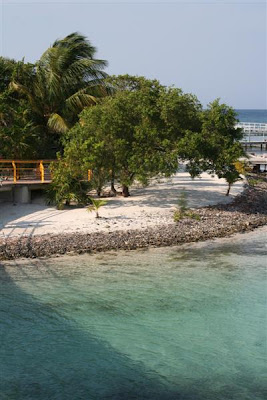 to one of the prettiest beaches I have ever seen. Beautiful palms…blooming flowers (Oleander?) 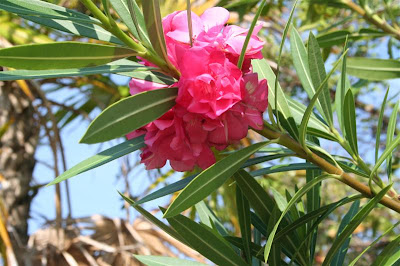 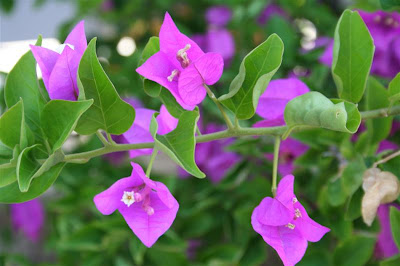 …pristine white sand (that was continuously being raked!) 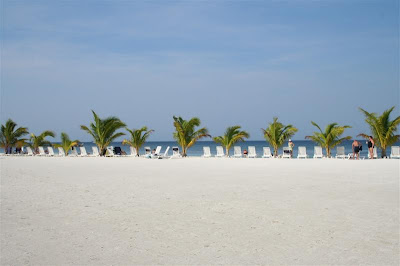 …and the water…just amazing. We walked to the other end of the beach to get our snorkel gear and then doused with sunscreen. Today we decided that I was really going to get to snorkel. No pulling Madalyn around…so Michael and Madalyn stayed on the beach to snorkel from shore…and Katie and I walked to the end of the pier to go on a guided snorkel tour. The access into the water was really easy, the ladder had a lot of steps and handholds (some of the ladders have been a struggle to use!)…and I got in to put on my flippers. Katie got all suited up on the deck and then jumped in. We snorkeled around the pier…and it had some beautiful coral formations and lots of fish. 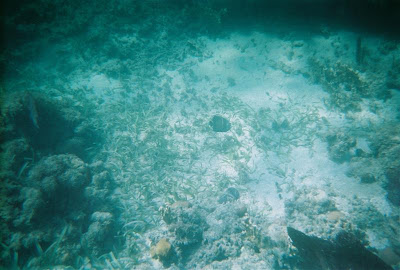 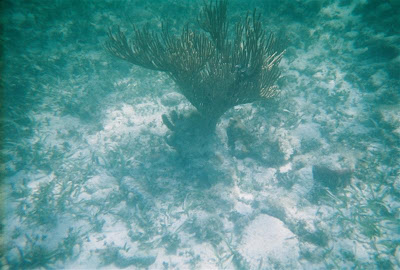 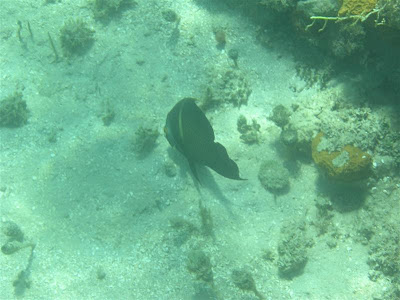 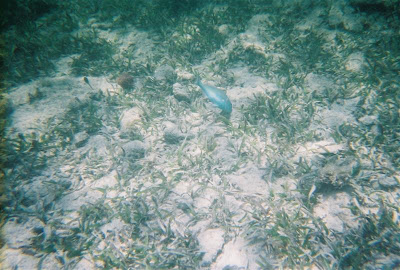 Parrot fish were in abundance. Although you can't really tell from these photos. Somehow the fish were not convinced to stay put so that I could get their picture. Or come together for a group shot. Stupid fish. I was about to call Michael and Madalyn from the beach because the snorkeling from here was so easy – and no waves – when a guide called us all over to the pier as they were about to begin the tour. Oops…I thought we were already doing it!

Our guide was going to lead us out quite a ways…it would be 10ish feet deep and then we would come to a drop off of about 100 feet. We were to stay together and not leave the tour. If we got wanted to go back or needed a rest, there was another guide accompanying us in a kayak. The group headed out…but we were behind because Katie needed some help adjusting her mask so that it would not leak.

I held Katie’s hand so that we would stay together…and we saw some beautiful sights. As soon as we passed the buoy line though…the waves got high. Our group was really far ahead of us…as was the kayaker! I am so glad that Michael and Madalyn did not accompany us…the waves would have been way too much for them. I would stop every once in a while to be sure that I still had the kayak and other snorkelers in sight…and sometimes I had to wait for a wave to push me up so I could see!

Katie and I found a cool spot…and we decided to hang out there and wait for the group to head back out way. We saw some schools of blue-black fish (that is their scientific name, you know!)… 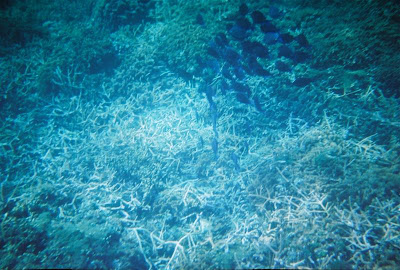 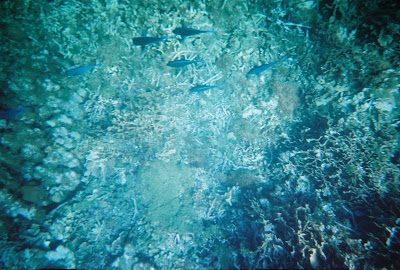 and pretty soon Katie is tapping me to show me that the group is headed out way…and now we are in front with the guide!! The swim back to the pier was easy – as the waves pushed us most of the way. Going out, and going against the current was hard work!

After we got back to the pier, we went to get Michael and Madalyn so that they could do some snorkeling. It took a little convincing for Madalyn – as all she could think about was how scared she got in the Caymans – but she eventually relented – and discovered how much she liked jumping in the water from the pier! 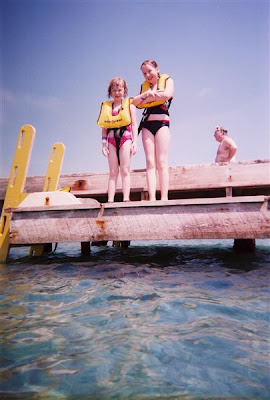 Michael paddled around a bit (see...he's holding that Olympus with the underwater housing that I have been telling you about) 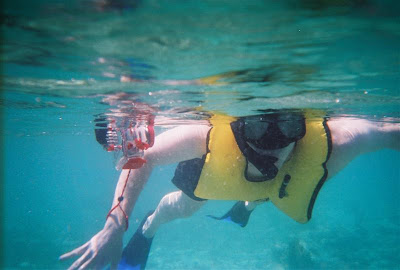 …and then I showed him where some of the better views were. I think we used 3 underwater cameras on this trip!

We finally decided that we needed to head back to the ship, so we gathered all our junk and walked to the entrance where a van was waiting to take us back. I got lots of pictures out the window of the city. 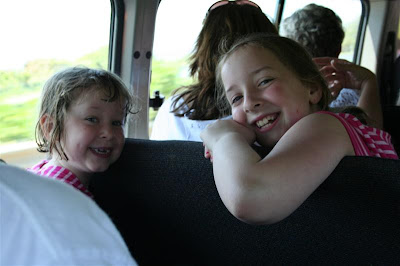 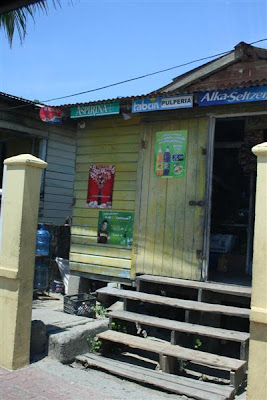 Back at the ship…we walked through some stalls selling native crafts and I bought a mahogany vase for mom and the girls got some money from Honduras.

I just mentioned to my husband that I'd love to go on a cruise...he's going to take some convincing. :o(

Why is it going to take some convincing?! A cruise is a great vacation...good for family time...great to send the kids off to camp to have alone time...and so much is included. Maybe when I get my pictures up, you'll convince him. Or just go with another mom and kids. I volunteer!

He doesn't like to spend lots of money on vacations...I think the biggest problem is that he's never been on a cruise. I think he'd love it if he tried it.

Growing up, his family mainly took driving trips locally...whereas my family flew to Europe and spent lots of time in the Caribbean. So, we have different backgrounds in our family vacationing. :o)

I'd love to go with another mom and kids, that'd be fun!

I like mom and kids trips. We are actually going to St. George island for two weeks this summer...me and the girls...my mom...and a friend of mine with her two girls. Michael doesn't have the vacation time so he's just coming down for one weekend (the first - to provide the manual labor of getting all our luggage into the house!).

My girls and I go on our own quite often. Rob can't get away as much as I can -- a benefit of telecommuting and a downside of an academic job, eh?

NYC...how fun! I have never been. Except when our car broke down on our way to Boston. Hmmm...perhaps I have a trip/car curse?

We're taking the train for this one. Last time, the train did have issues with the tunnel. Oh well.

I was born in Brooklyn and grew up in NY, so I don't feel totally out of place. I'm looking forward to the trip, even though I was shocked at hotel prices. YIKES! They are more than the hotels we are looking at for our June trip -- to Japan!

Wow...I am surprised that NY would be more expensive than Japan. How long will you and the kids stay? Anything in particular that you are doing?

Nice presentation of the tour. I actally work for Carnival and was just looking for info on the island when I came across your blog. It really gives a good idea to future visitors. best wishes. J