While I was on my cruise, I was tagged by Rhea over at Word Tangle to do a meme. I am so excited to be picked. As the last time I was tagged for a meme (about what was on my desk) was by my own daughter – who was tagged before me. Not that I am bitter or anything.

So…here are the rules:
1. Link back to the person who tagged you. (Check)
2. Post these rules on your blog. (Check)
3. Share six unimportant things about yourself
4. Tag six random people at the end of your entry.

Ummm…six unimportant things about me. Where, oh where to start? 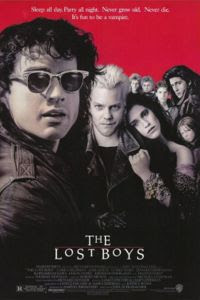 1. The Lost Boys was the first “legal” rated R movie that I saw in the theatre. Firefly mom over at “Pack of Hungry Snails” actually blogged about this movie a few weeks ago. What a great 80’s movie. It has Kiefer Sutherland and his Billy Idol hair…all those great 80’s outfits…and the wonderful line “death by stereo.” Did you know that there is even a band who named themselves that? Or that in the first season of 24, Jack Bauer actually killed a terrorist by biting him on the neck?

2. I am allergic to shrimp skin or raw shrimp or something. I used to cook shrimp all the time. I would buy raw shrimp…and peel and devein it…and cook it. And then one day, I was doing my thing…and my hand got swollen. And red. And extremely itchy. I can eat shrimp…it’s just the raw version that gives me hives. It is a wonderful allergy. Peeling and deveining is a pain. We have taught the children how to do it. That’s what children are for, right? Free labor?

3. I don’t drink coffee. Ever. In any form. Yuck. I don’t get the worship of Starbucks. I don’t like coffee ice cream. Kahlua. Tiramisu. I get my caffeine from Coke Zero. Or Diet Coke with lime. People say they want to get together for a cup of coffee. It would seem strange to say “let’s meet for a diet coke.” But that’s what I would have.

4. I have never seen an episode of “Friends,” or going back a few decades, an episode of “Dallas.” I am not sure what I watched instead…but I have not seen either. I think I might have missed out on some cultural literacy. Or not.

5. Our team came in third place last night for trivia. There was just three of us last night…and I think we did pretty well. Final question: What is the oldest city in the US that is a state capital? No one got it correct. We were actually in a three way tie for third. Tie breaker question: according to the US census in 1860, what percentage of South Carolina’s population was slaves? We were the closest…and won the $10 in house cash. It should pay for one of Michael’s beers next week. 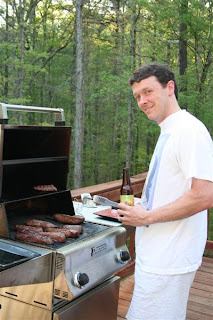 6. I have never mowed the grass…changed a tire…or cooked on a grill. I am such a girl. I like to cook…but, I don’t know…there just seems to be something inherently dangerous about lighting up that gas grill. It’s a man’s job. Me cook with fire. (insert your own Tim Allen grunts here) No thanks. I don’t even fire up the gas logs in our fireplace. I did it once and almost singed my eyebrows right off. I did not have a picture of Michael being manly and cooking on the grill. So I was FORCED to go to Target and get steaks for him to cook tonight for dinner. The things I’ll do for my readers.

Well…there are some random things…and quite unimportant. Now, my next job is to tag people. I can tag you…doesn’t mean you’ll actually participate…but hopefully you’ll feel loved. Admired. And most importantly, obligated.

1. Kim at Four Chambers of My Heart. Because she humored me and was the only one to do the last tag.
2. Gwyneth at Daily Goon. Because she blogs about her kids…I would love to know random things about her.
3. Joye at Here I am. Joye is a teacher. And has her kids write stories about potatoes. Random could be really fun with Joye.
4. Yertle at Smile, Play, Dream. I have just discovered Yertle’s blog...and she does some amazing pondering. And she participates in memes. So I think she might do this!
5. Sugar at I like Pi. This is my daughter. And she has a beautiful blog. Corrupted with horrible grammar. Because it’s her place. And I make her speak and write properly…except here.
6. Debbie at This is the Life. Because she doesn’t drink coffee either.

I appreciate the tag as it forced me to take 10 mins and reflect. Thanks! Also loved your 6 things. With my little ones, we never finish a sentence- let alone a conversation so this is a great way for us to communicate.

YAY! You did it!! Good job. I learned some new things about you. And, let me say, you are awesome for getting your hubby to make steaks on the grill just to get blog-worthy photos (that's your story and you're stickin' to it, right?) hehe

I don't drink coffee either!! I do love Starbucks, but only because my mom got me hooked on their hot chai tea. LOVE that drink. I get it mixed with soy...I'm not a huge soy milk fan, but that's the way I got addicted to this certain drink so I can't stop now. It's so yummy...an expensive...

I also LOVE Tim Allen and the show Home Improvement. Our DVR is full of that show because the boys love watching it. His grunts and funny noises are hilarious.

Kim--With your four...I know you need "me" time! And I swear that I "talk" to Gwyneth more on this blog than I do in real life!

Rhea--Yeah...Michael took one for the team in having to cook steaks. You can see how exasperated he is :-). I think he's just become more supportive of my blog. Until he sees what else I got at Target...

And...I would much rather "Home Improvement" be on my DVR than the drivel the girls put there. Spongebob...Pokemon...and an unreasonalbe amount of "Full House." (Do you remember Michelle's signature line of "you got it dude?" It is said way too often in my house. I need to show them pictures of how those Olsen twins turned out...)

Ok. I'm in. BTW, I have never mowed a lawn either. And I am also afraid of the grill. So funny! I will think about it today...and post it tomorrow...oh geez, the pressure.

Kat, I did it. It was kinda fun too. I love that you bought steaks just to get the pic. Nice! hahaha

Fun post, Kat. Thanks for stepping up to the plate ... making that dreaded Target run ... forcing the hubby to bbq those steaks ... all for a bit of blog fodder. We all appreciate your efforts ;-)
One sad note: I'm not sure we can still be blog friends. No coffee?!?? Oh, ok, we can still be Diet Coke buddies, I guess.

Debbie--I am looking forward to your take on this meme. Your take on just about anything sends me to fits of giggles.

Joye--Loved it! And I am not sure that I want to be responsible for you reading the Tucker Max book.

Susan--Diet Coke buddies works. Now you just need to bring your guys out here to study history with Katie...and we can drink our diet cokes on the back deck and admire my creek view. :-)

Pokemon's ok. There are some cute little critters. lol

Full House is not a show my boys are into. I could see how some of those sayings on that show wouuld drive you nuts though.

Susan's comment above cracked me up! Diet Coke buddies.

Rhea--I have some thoughts about Spongebob...but I can't write them as my daughter reads this blog...and the comments. You have to wonder about the drugs these people take that create some kids shows. Teletubbies anyone?

My issue with Pokemon...is that my girls try to talk like them. It's like babytalk. On meth.

Teletubbies was wild. I recently saw this Yo Gabba Gabba show, and it's totally bizarre also.

Oh, the babytalk from Pokemon, I understand how annoying that could be. My boys don't do that.

My boys watch Sponge Bob and have some of his video games...but I can only listen to it for so long...and they know it. hehe

I've tagged you for a meme, I'm sorry. It's short and sweet, I promise and you won't hurt my feelings if you don't want to do it.

I found your blog through Debbie's (This is the Life). She tagged me for this meme and I had to come over and read yours. I'll be back!!

Oh, and I LOVE your taste in music.

What is the oldest city in the US that is a state capital?