Today is my baby’s birthday day. She keeps telling me that she’s not a baby. I tell her that she’ll always be my baby. Even when she has her own babies. Even when she’s 70 and wrinkly, she’ll still be my baby. Here she is just a few hours old. 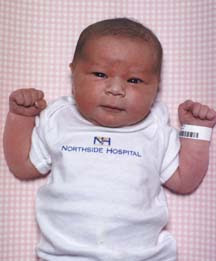 Where on earth that dark skin came from, I have no idea…considering that now she is pale and blonde!

Last year we celebrated Katie’s birthday at Disney World…so this year, Madalyn got to celebrate her birthday on our cruise. Before our cruise, I was researching shore excursions, and for so many of them you had to be 8. I am not sure why you need to be 8 to snorkel…or to zipline…or to swim with dolphins…but that is the minimum. Madalyn is a great swimmer and a trooper…so we decided that we would celebrate her 8th birthday on the ship. Shhhh…don’t tell!

In honor of her 7th birthday…today’s Thursday Thirteen is dedicated to Madalyn and her favorite things: 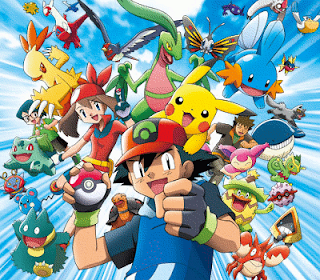 1. Pokemon. She did not start getting into this until this year. And she knows it all. I had no idea that there are different types of Pokemon. Grass types. Electric types. More types than I can recall. If there is a moment of silence…usually Madalyn will say to me: “wanna ask me anything about Pokemon?” (Do I have to?!)

2. Webkinz. Yet another obsession. You buy the stuffed animal…and each comes with a unique code that you enter on the webkinz site…and you have a stuffed animal and a virtual one as well. Don’t lose the code. Pandemonium, angst, and much suffering will ensue.

3. SpongeBob. Who dreamt this up? It is painfully annoying. Imagine listening to episode after episode on your car DVD player…with no headphones for the kids! But Madalyn loves SpongeBob. He makes her laugh out loud. (I love my Madalyn laughs!)

Going to the movies and having popcorn (Finding Nemo was her first movie in the theater) Popcorn is an essential part of this equation. And Madalyn can eat her weight in popcorn. We will usually get the ginormous tub…and finish before the previews even start…so we HAVE to get a refill. 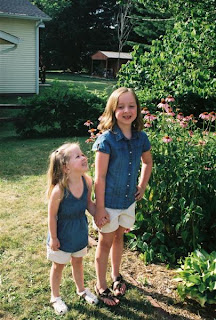 6. Going to School…and especially her teacher Mrs. Murphy. This is her first year in public school and she just loves it. Madalyn is sad on the weekends because she misses her teacher. 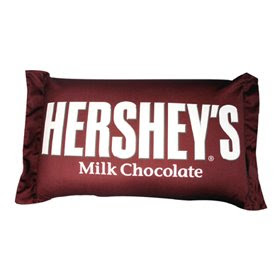 7. Chocolate. Like popcorn, she can’t get enough of this. One of my favorite Madalyn stories is about “chock-it.” Madalyn was about 18 months…and she was at home with me while Katie was at pre-school. We had just finished lunch and I put on a TV show for Maddie while I cleaned up in the kitchen. She was down in our family room – and I could see her from the kitchen – and she was sitting in my mom’s recliner. She kept babbling and waving to me. I was impressed that she let me finish cleaning and that she was entertained the entire time. I finished and I was ready to walk out the door to get Katie, when Madalyn walks up the three steps into the kitchen. She is COVERED in chocolate. It’s all over her face…her clothes…she even has chocolate hand prints on her diaper inflated rear end! She looks at me with a devlish grin and says “chock-it!”

She had gotten into some chocolate that my mom had received for Christmas – that she had stored by her chair. I manage to quickly clean her up (but took pictures first – and naturally they are film…not digital…and I’m too lazy to pull them out of the scrapbook and scan them for you.) and get out the door so I am not late to pick up Katie. Madalyn fell asleep in the car on the way…and I was getting her into the stroller at school…when another mom commented on how cute she was asleep. I was telling her about the “chock-it” incident, and the mom said “she’s not asleep…she’s in a diabetic coma!” :-) 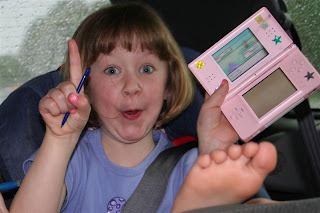 8. Nintendo DS. She got one of these from her grandmother for Christmas…and she is addicted. It’s the first priveledge to be taken away as punishment…and we’ve had to invoke a weekends only rule. But she loves her DS…and it’s better in the car than a SpongeBob movie.

9. Swimming (just not with Sting rays…and especially with Dolphins) 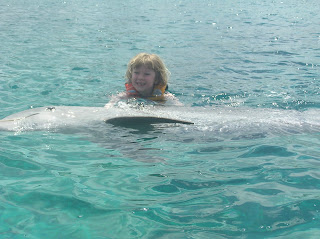 The child is a fish. We have amazing public pools near us…they are like water parks, complete with huge slides, lazy rivers, fountains, and water playgrounds. When Katie was big enough…she would go down the waterslide…and Madalyn was so jealous. She couldn’t go down until she could swim…because she had to swim across the pool to the steps…and you couldn’t wait at the bottom or go down with her. She had to be able to do it herself. She was quite determined that over the Winter she would learn to swim so that when the pool opened, she would go down that waterslide. Pretty stubborn for a four-year-old! She did it…and is quite proficient in the water.
10. Animals. Any animal. All animals. She loves the aquarium. The zoo. Finding Frogs in the yard. Lizards in the grass. Just don’t ask her to swim with a stingray.
11. Reading. Madalyn was a late bloomer when it came to reading. But she has caught the book bug that her mom and sister have. She goes to bed with her webkinz…and reads them a stack of books each night. In the morning when we wake her up, it’s hard to find her for all the books in her bed. 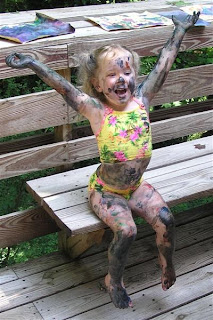 12. Drawing. Madalyn is so happy with some colored pencils and a spiral notebook. And painting. But sometimes it can get out of hand. Remember, I don't like crafts! 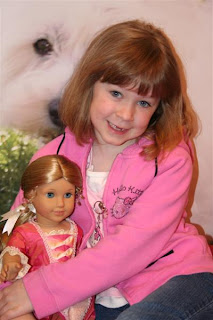 13. American Girl. Katie and Madalyn have been reading the books. They have been going to monthly American Girl club meetings at our local Borders for about a year. And she just got her first doll last month as an early birthday present from my mom. She loves dressing her in different clothes…and she is just so careful with her Elizabeth doll. Which is a change from my house full of naked Barbies.

Your Madalyn is beautiful and looks like a ball of fun. You have to love little girls.

What a beautiful, wonderful tribute to an absolutely adorable young lady!

Will you visit mine Thanks

Oh my gosh, Kat, that picture of her covered in paint is priceless! Great TT!

I agree, the one covered in paint can be used to your benefit, when she is much older and dating. LOL
Happy T13!

A beautiful tribute to Madalyn! Happy Birthday to her!! What a wonderful post. I love her Thursday thirteen. :o)

What a great, great post! Happy Birthday to Ms. Madalyn! Looks like it has already been special...now you get to celebrate AGAIN and eat more cake...preferably "chock-it" cake!

hope her b-day is great!!

A big happy birthday for my favorite 7-year-old, Madalyn Grace!
You big day has been on my calendar all month and I've had to countdown for you here in TX! I hope you have a splendid birthday and save up your lung power for blowing out all those big girl candles! I love you!
fairygodmothercindysue

I had two thoughts while reading this -- first, oh I am so happy my kids have outgrown pokemon and that webkins wasn't around when my kids were younger...

and, she is so right about SpongeBob and popcorn. Love the SpongeBob, and you have to have popcorn at the movies. HAVE TO.

I have the EXACT SAME Nintendo DS... I should be worried (about myself) lol.

Thanks so much to all of you for coming by today to help us celebrate Madalyn's 7th birtdhay. About that paiting picture. Can you guess when it happened? I wasn't home. We would never have gotten paint out. That was a daddy event. At least he took photos!

How time flies...it seems mere moments ago she was eating cheese dip with her fingers. ;o) I've always loved the glint in her eye!

Amy--
I had totally forgotten about that Madalyn story. And for anyone reading this and dying to know...in a nutshell: I was having a get together with kids banished to the basement. I had a layered bean dip on the table...with shredded cheese on top. Madalyn came by and just grabbed some cheese off the top. She went back to the basement where I went to yell at her for coming up to the party. So, what does she do? She goes back upstairs and returns the shredded cheese that she had in her hand back to the dip.

How sweet. I love my pink DS too. I am addicted to the New York Times Crossword Puzzles.

Thanks for visiting my 13, and for the cruise info. I appreciate it. I am going on my first cruise in a couple of weeks.

Yertle - right back at ya! Thanks for coming by...and you ought to scan through my last week of posts - I blogged while cruising! Have a great time.

Rhea -- it was hilarious. After the fact. During, I was quite mortified. The dip was on my coffee table...with a bunch of moms sitting around gabbing. So, when she put the cheese back...everyone saw...except me...because I was still in the basement yelling at my DH about not containg the children! The moms were rolling on the floor when I got back upstairs to join the party!

What's even funnier is that bean dip was completely finished...except this small circle with "deposited" cheese in the middle :-)

Happy birthday to your lovely girl. I agree with you. No matter how old they become, they are still our babies.

Happy birthday Madalyn! What an adorable little girl. I loved how you used the TT to celebrate her personality. Thanks so much for stopping by and commenting on my TT!

I hope she had a wonderful birthday!

I also did a birthday post last week...for my stepson who turned 18!

You've got more time, but goodness it goes fast, doesn't it?

Yep - Madalyn and Essie have SOOOOO much in common!!!

I LOVED this post for Madalyn's birthday. It was so cute and sweet.

She has great expressions. These pictures are awesome.

Is she still into Pokemon, Webkinz and American Girl?

Great photos of a pretty aweson kid. You must be rally proud of her, Kat.