Sunny Day at Sea aboard the Carnival Legend

Today we woke up to overcast skies…but the sun broke through rather quickly. We had breakfast in the unicorn café and then we took the kids to get them registered for Camp Carnival.

So…what did Michael and I do with our almost two hours of alone time? Ummm…not much. I found our pictures in the photo gallery. They really weren’t that good. I was surprised. They were on the verge of being blurry. Like they had a line of 200 more people to take pictures of…they just wanted it done quickly. Maybe “like” is not the word…but definitely could be a better choice. I still ended up buying 3 – one of the four of us as we embarked on the cruise…one of Madalyn and me in the dining room (I’m usually the one behind the camera…so I get thrilled when there is a good picture of me!)…and another one of the girls holding up some money bags in the casino (shhh…don’t tell…they aren’t allowed in there!).

After we got our photos…we went to hear about the excursions available in our ports of call. Not because we needed to listen to the lecture…but because Michael heard they might be giving out coupons. On our last cruise, Michael won an excursion (to Passion Island…I had to buy my own!)…so he was thinking he might get lucky again. Wrong. We played another game of Bingo while we waited. Another offering to the Carnival Gods.

We had to pick up the kids at noon…so Michael went to get them while I went to spend an unmentionable amount on our shore excursions. Where are we going? Do you really want to know, or do you want to be surprised? I hate surprises. I hate when someone tells me they know something and then won’t share the info. I am not going to be like those people…I’ll tell you what we are going to do.

Tomorrow: Grand Cayman: Stingray City and coral reef snorkel
Wednesday: Cozumel: Dolphin swim. Yes, you read correctly…we are going to SWIM with dolphins. (I sure hope our car problems are not big ones. We just spent the repair money)
Thursday: Belize: Michael and the girls are going to zip line across the rain forest. Me – nope! Not sure what I am going to do. Maybe see the ruins at Altun Ha. Maybe snorkel. Maybe hang out at the pool. Take a nap. Who knows?!
Friday: Isla Roatan, Honduras: Coral Cay snorkel adventure.

After spending the college fund…we went up to lunch at the Unicorn Café. They have 4 stations set up for you to choose from – Asian, Caribbean, deli, and American (like Thanksgiving dinner type foods). The girls saw calamari fritters and they jumped at that. Until they tasted it and changed their minds. Madalyn has now had a cheeseburger for every meal except breakfast!

Michael had read in the capers that they were doing a Fear Factor contest on the Lido deck…and he was all over that. He actually auditioned for this show a few years ago. Never got a call back. They drew names…and he did not get picked. But that was okay…because it was more like stupid human tricks than like Fear Factor. The girls finally got a chance to get into the pool. 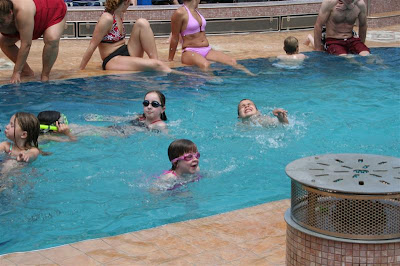 They were so amused with the water. The ship is still rocking – so every time it leans – the pool water goes rushing to one side. The girls kept trying to swim against the current. Next we headed over to the slide. Maybe being up this high will help to prepare them for ziplining? 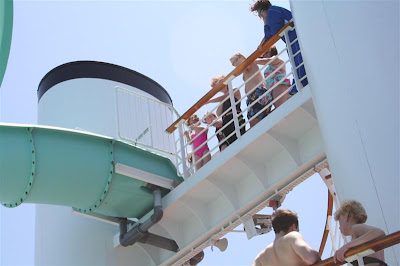 After one trip down the slide 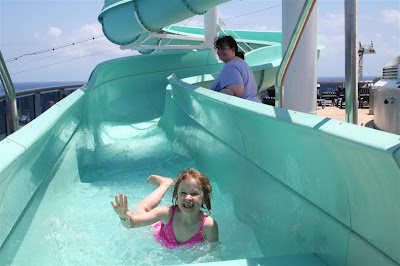 …we herded the girls back inside for an activity the grown ups wanted to do: Super Trivia. Remember we love trivia. There were maybe 40 people there…and we were organized into 7 teams. One team member had to pull a color representing a category out of a hat…and if you got it correct you had to roll the dice to see how many points your team received. The girls were appointed as category pickers and dice rollers. We did well…but got some off the wall questions (that’s my excuse, and I’m sticking to it) like: a cat has 100 vocal sounds, how many does a dog have? What is the life expectancy of a dragon fly? What does the J&B stand for in J&B scotch whiskey?

The kids did not want to go and see the “New and not so new Newlywed Game” so we dropped them off at camp. Katie is in an age group where she can sing herself in and out of camp. So…she…on her own…went back to the cabin to change out of her swim suit…and then went back down to Medusa’s Lair (what a great name for the kids camp area!) to check herself in. Madalyn needed a bit more supervision…so I brought her back to the cabin to help her change…and then Michael walked her to Noah’s Ark (now that sounds more like a kids area) and then met me in the Follies Lounge for the Newlywed game. What a riot. There was a couple that were just married on Sunday…a couple that celebrated their 50th wedding anniversary on Saturday…and a couple somewhere in the middle of those two. Somehow the newlyweds knew more about each other than the other couples. If you are on a cruise…this is a show to not be missed.

Michael and the kids spent the rest of the afternoon at the pool. Late afternoon is a great time to go. People who were there early are done. People who have early seating for dinner are in their rooms. Leaving the pool for only my family. And leaving me alone to blog.

And then we got showered and primed for our first formal night. We left the room a little early so that we could take advantage of all of the formal photo opportunities. 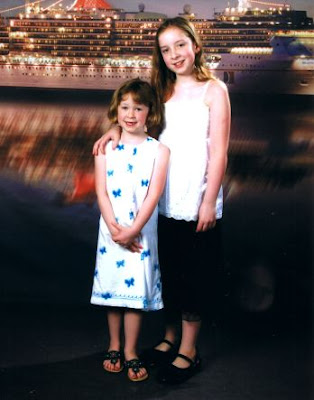 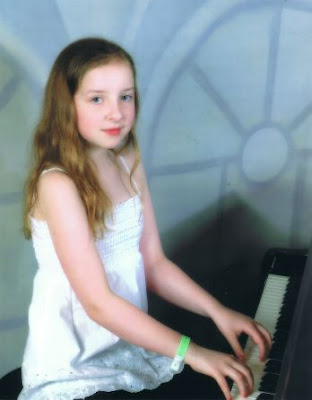 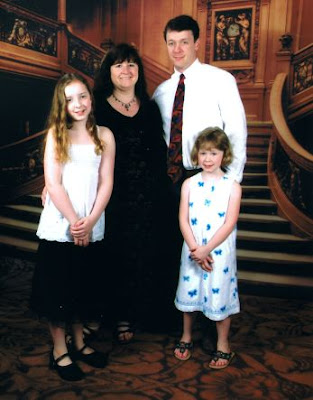 On our last cruise, the formal picture of Michael and me was not good…so I figured that if we get lots done…at least one will be good of the four of us. Madalyn was not so keen on my plan. She thought that I was keeping her from dinner by doing this. After I let her rush us over to the dining room…she realized that we had to wait in line. Again.

The opened the doors promptly at 8:15 and we walked to our table. 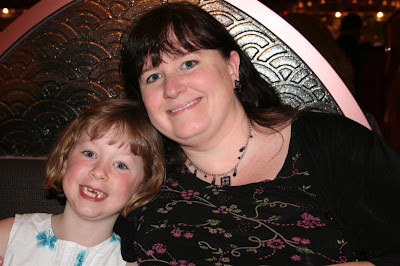 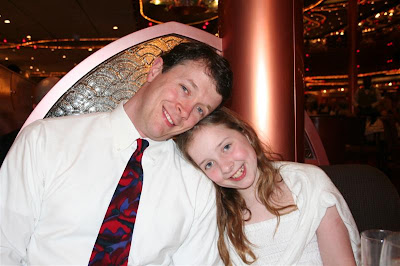 Phillip remembered that we are celebrating Madalyn’s birthday tonight (it’s not for two more weeks…but this is a good excuse to celebrate)…and Memel immediately brought the girls their requisite glasses of chocolate milk. What’s on the menu tonight?

I had pumpkin soup. 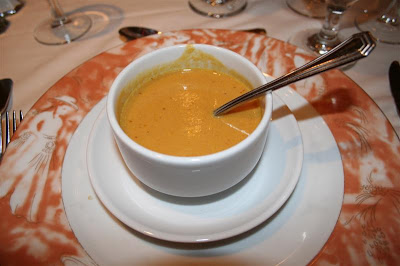 Oh, wow, this is awesome soup. I tried to get Madalyn to try it, but she was having none of that. Katie agreed to try it (I didn’t tell her what it was until after she had a bite)…and then I lost my soup. She never gave it back! 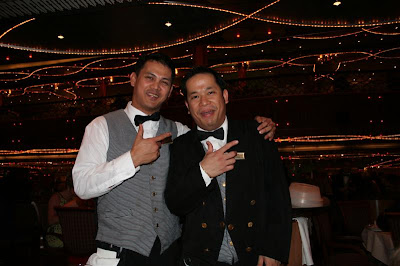 Katie and Madalyn had shrimp cocktail…Madalyn did not like hers…Katie scored another appetizer!

Michael had some sort of mushroom dish, but forgot to take a picture…I think he liked it: 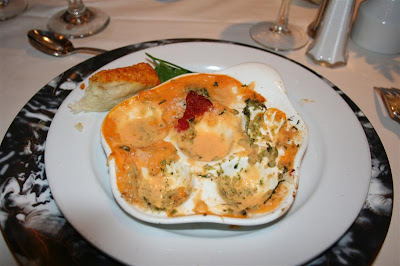 For dinner, I had Lobster tail and grilled Tiger shrimp: 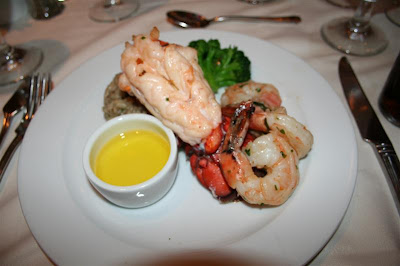 Katie and Madalyn had spaghetti carbonara: 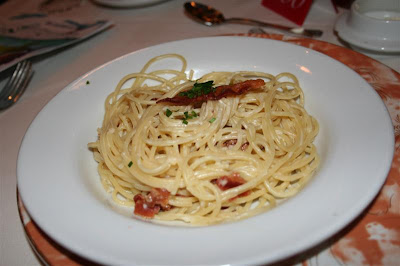 Michael had the Hudson Duck: 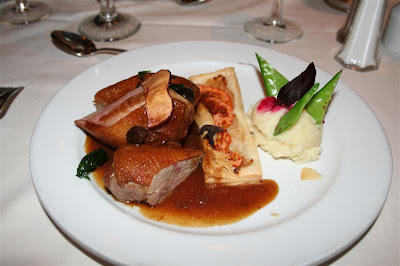 And for dessert, I had carmelized apples with puff pastry: 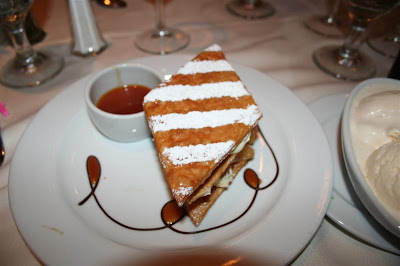 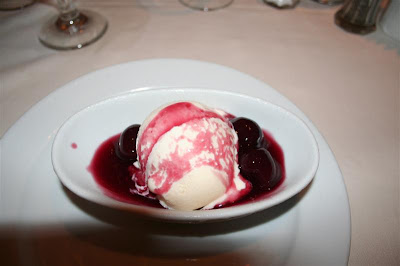 And the girls had a re-run from last night with chocolate melting cake.

At the end of the meal, Phillip and Memel came to sing “Happy Birthday” to Madalyn. They brought her a cake with a candle. But the cake…ummm…gross! On the menu tonight, the only cake that was there was diet banana sponge cake. And that is what they brought her. Quite gross. (Before dinner, I told Madalyn that I celebrated my birthday on a cruise, too. And that the cake they brought me was really disgusting. So she was prepared. And now thinks that all birthday cakes on cruises are nasty. Be warned J) 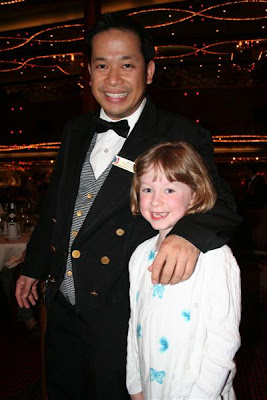 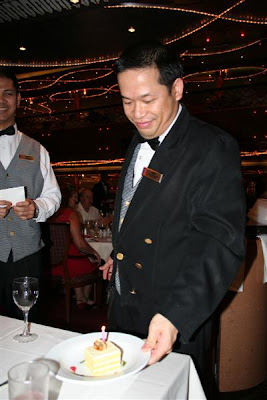 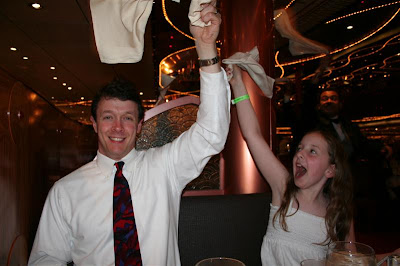 At the end of dinner, there is usually some sort of "entertainment." And tonight there was singing and waving of napkins...

After dinner…Michael went back to the room to catch the NCAA championship game…and the girls and I went in search of Bingo. We were out of luck in the Follies lounge…so we went downstairs to the Firebird lounge to do karaoke. But there was no Hannah Montana or Miley Cyrus on the playlist, so we went to get ice cream instead. Because we hadn’t had enough dessert yet.

We finally headed back to the room to crash Michael’s bachelor basketball party. We discovered that Michael wasn't laying on the bed...but preserving the first of our towel animals for the girls to enjoy...along with a good night chocolate chip cookie...and mints that weren't exactly on our pillow. 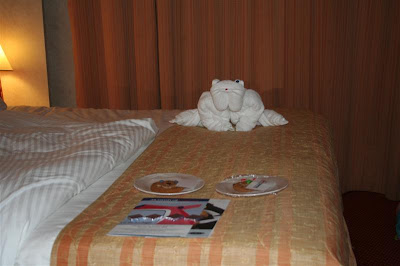 And then we drifted off to sleep with the rocking of the ship and the excitement of Kansas winning it all in overtime.

I read your port excursions and then basically the rest of the post read like "blah, blah, blah" to me. That's all I could focus on. I'm squirming in a big jello vat of jealousy over here. I want to swim with dolphins!! I did it once when I was a lot younger and loved it. I need to do it again and my boys would just give anything to do that...

The girls and I are thrilled by your excursions -- though I would want to go back to the turtle place on Grand Cayman -- I think it is still there. I still have a magnet (all scuzzy now) from when I went there at age 12.

Birthday cakes -- my worst was one in the carribean as well. It was a fruit cake - gross ...

We look forward to hearing more of your adventures! make sure to make a new post saying you've got photos up. Google Reader is my only way to know there's something new to look at!

Have a wonderful day tomorrow!

Rhea -- "blah, blah, blah" huh? LOL! I cannot wait for tomorrow...and I heard that we are looking at sunny skies and 90 degrees!

Gwyneth--I will let you know when I get the pictures up. I have a feeling it might not be until we get home. I'll keep trying...but I don't want to waste my mintes when it does not want to cooperate!

I love all the pictures! You guys look so nice dressed up. I like your neckace. I love the water slide pictures too. :o)

Excellent! Thanks for sharing your photos ...

Oh my gosh! I dont blog for over a week and what do you do!? You go on a cruise w/o me! LOL

I love the music! What a great time for you and your family! Safe travles! I look forward to more pictures!!!

I MUST blog my cruise story soon... but I have to figure out where the pictures are....